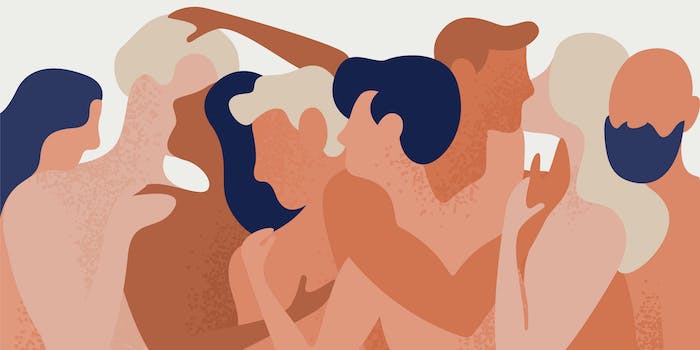 If you want a great poly dating app, meet #open

Dating without having to explain what "polyamorous" means.

Love has many faces, and in 2020, we are finally and openly learning to accept them all. While this has been a long time coming, it most definitely has not been easy. It seems like each step of the way has been met with some kind of resistance. In 2015, the US finally secured the nationwide right to same-sex marriage. That fight lasted decades and gained momentum with the 2004 Massachusetts legislation legalizing the act.

Seemingly less monumental, but equally impactful, was the evolution of the dating app in 2012. According to the Atlantic, “Dating apps originated in the gay community; Grindr and Scruff, which helped single men link up by searching for other active users within a specific geographic radius, launched in 2009 and 2010, respectively. With the launch of Tinder in 2012, iPhone-owning people of all sexual identities could start looking for love, or sex, or casual dating, and it quickly became the most popular dating app on the market. But the gigantic shift in dating culture really started to take hold the following year, when Tinder expanded to Android phones. Then it expanded to more than 70 percent of smartphones worldwide.”

The ability to swipe for love changed the relationship landscape for so many. Hook up culture was born, and the era of marrying your neighbor seemed to disappear overnight. However, in 2016, another great shift occurred when Tinder introduced its new gender options. We’re not saying that Tinder championed the fight for gender identity. But it, and so many others, most definitely lent it a helping hand.

While the fight for diversity and inclusion persists, poly dating apps have been a saving grace for those seeking community. #Open is a poly dating apps that brings us closer to accepting and embracing all the faces of love. It has given its members a much-needed connection to their communities.

#Open is the best poly dating app for connecting with unlikely couples, individuals, and groups of all shapes and sizes. It allows you to choose between creating a solo, partnered, or a double profile. Also it allows you to toggle in between the two with the ability to edit anytime. The app does not allow any NSFW images and encourages the use of usernames or nicknames for heightened security. However, you can add your social media handles and define your current relationships and statuses. The site functions on hashtagged words and offers up three phrases for user completion such as “I’m open to trying…”, “My interests are…?”, and “I’m looking for…?” which all speak to the ethos of being inclusive and accepting of its users’ preferences. What this site excels in is the diversity of its users, and the no-judgement community it has built around them.

If you want to experience poly dating apps, you shouldn’t have to do it at a price. Thankfully, the creators of #Open feel the same way as the app is available to download for free! The best part? You won’t find yourself in one of those traps that requires a purchase in order to swipe. What you see is what you get!

Opportunity to be your true self

#Open doesn’t just talk the talk, it walks the walk. You can live your truth on this poly dating app by selecting from any of its 60+ gender options, orientations, relationship styles, and relationship statuses. Swipe from the comfort of your own home, or meet new people with the easily adjustable distance feature. If you’re looking for something that you can’t find on the app, go ahead and search for it by using hashtags! The possibilities are truly endless on #open.

On the #Open website, it reads that #Open missions statement goes beyond dating. “We’re working to create a community where people can form genuine connections, and we’re hoping to make the world a little better while we’re at it.” Inclusion, identity, community, respect, communication, and education are among the key values the founders set out to champion and uphold to this day. #Open’s rules are simple and center around negotiation, inclusion, consent, and an open mind. It doesn’t get much better than that.

Community ambassadors you can believe in

I’ve never come across a poly dating app with community ambassadors, but after seeing the model members on #Open, I think it should become the norm. From activists, to disabled content creators, these ambassadors live and breath #Open’s mission statement and are shining role-models for any members in need of some guidance. I strongly encourage any questioning member of #Open to take a second and look into the ambassadors that are championing this platform’s ideas.

The only thing I wish #Open had is a more modern looking interface. That’s it. The app works just fine, there’s no glitching or lagging, the navigation is straightforward and the layout is clean, it just looks slightly dated. If that doesn’t speak wonders about the app, I don’t know what will.

#Open should be the standard for all other poly dating apps––it’s that good. The inclusivity and overall message is so refreshing and compelling, there’s absolutely no reason to not get this app. My hope, is that the #Open community grows to the same size as the bigger apps out there, which will give people in rural communities the chance to find each other nearby and not rely on distance features.