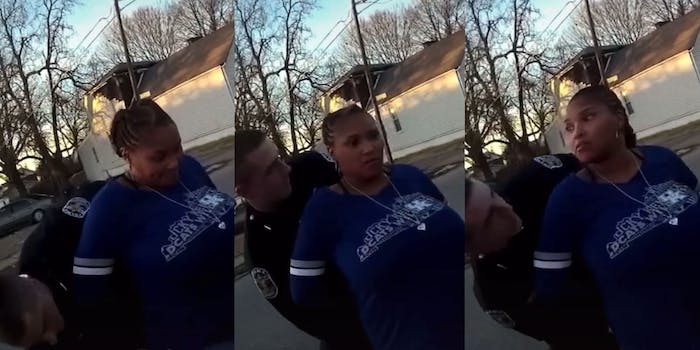 ‘Very distressing video’: Police pull a Black woman aside for a pat-down and search her inappropriately

'I seen her face change & I felt that in my soul.'

It’s hard to feel comfortable whenever you’re pulled over by a police officer. For some, the first thought they have in their minds is: “how much is this going to cost me?” For others, it’s “will I be victimized today?”

Health Data reported that Black Americans are most likely to experience fatal police violence. These statistics, and experiences, have culminated in a variety of socio-political movements. While some of these non-profits have been marred by controversy, many studies indicate that Black Americans are disproportionately on the receiving end of violent and fatal encounters with police officers in the United States.

These statistics and experiences have become part of a conversation in the larger push for American police reform, as social media has shined a new light on the consistency of police misconduct. These recorded incidents showcase how common police abuse of power can be.

A viral clip of a white male police officer performing a body search on a black female citizen during a traffic stop in 2019 is re-circulating on social media, sparking debate on Reddit.

In the video, bodycam footage shows then officer-in-training Tyler Gelnett performing a body search on Kali Coates after she was pulled over.

Gelnett pulled over Coates while under the supervision of another officer, who was wearing a body camera and overseeing the traffic stop. In the video, Coates appears to be cooperative and even pleasant with the officers.

However, her demeanor instantly changed when Gelnett performs a body search on her. In the clip, he can be seen groping the woman with his palms faced frontward against her body. Male police officers, depending on local laws, do generally have the right to search female suspects if there is no female officer present. However, according to the video, Louisville police training indicates that body searches should be done by brushing with the back of their hands, not with their palms.

The officer recording the incident immediately stops Gelnett’s search and tells him to step away from Coates. He begins to apologize to the woman and explain to both her and her boyfriend that Gelnett is a trainee and that he didn’t follow proper protocol.

He also assures Coates that the entire encounter is being recorded.

She would go on to sue the Louisville Police Department, which would pay her $50,000 for Gelnett’s groping.

Gelnett stayed on as a police officer with the department, that is until November of 2020 when he “was charged with official misconduct and drug trafficking for allegedly seizing marijuana while handling cases but then giving it to a woman he was in a relationship with.”

He plead guilty to the charges in February of 2021, paid a $500 fine, and was hit with two years of conditional discharge from the department.

Police officers say that Gelnett knowingly took marijuana obtained in traffic stops/investigations between December 1, 2019 and April 30, 2020 and handed it over to a woman he was romantically involved with. Her name was redacted.

“The fraternal order of police” has long been criticized for protecting officers who have wronged civilians. In this instance, however, there is a clear-cut case of a cop calling out a peer’s inappropriate behavior, for which commenters commended the supervising officer.