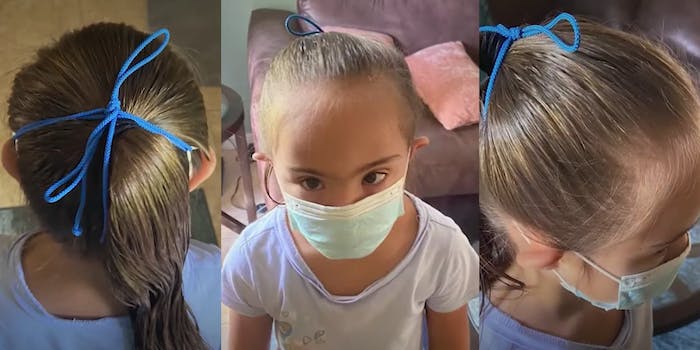 The viral claim was promoted on Fox News and allowed the parents to raise over $100,000.

The story of a Florida school that allegedly abused a 7-year-old girl with Down syndrome by tying a mask to her face spread like wildfire last month among conservative circles. But a local investigation by law enforcement has now described the parent’s primary claim as “unfounded.”

Jeffrey Steel alleged that his stepdaughter Sofia returned home from school in Indian Harbour Beach, Florida, on Oct. 7 in a “panic” due to the mask. Sofia, who is nonverbal, was “unable to breathe properly” and had her “health and possible life at risk,” according to Steel.

As a result, Steel began a campaign on the Christian crowdfunding site GiveSendGo. The family even alleged during a subsequent appearance on Fox News that the alleged abuse had been going on for over six weeks without their knowledge.

“I was just flabbergasted,” Steel said at the time.

Now, Florida Today reports that the Indian Harbour Beach Police Department found numerous issues with Steel’s claims. Video evidence and eyewitness statements, according to investigators, showed no evidence of physical harm or abuse towards Sofia after the school began tying a shoestring-type cord behind her head in order to prevent her mask from slipping off her ears.

“As witnessed by multiple teachers, school aides, bus drivers, and school administration staff, at no time, while having the mask tied on, did (Sofia) ever exhibit any signs of distress, discomfort, difficulty breathing, or any other health concerns,” investigators wrote.

In fact, some evidence showed that Sofia actually preferred to wear her mask during the school day.

“On at least one occasion, Sofia was observed on video placing the mask on herself; on another, her teacher told police, she ’threw a temper tantrum’ when she was not allowed to wear her mask,” concluded the police report.

Additionally, police found evidence of false statements provided by Sofia’s parents during the investigation. Despite Steel providing pictures of Sofia to police that he claimed under sworn testimony were taken on the day he discovered the alleged abuse, metadata showed that the pictures were taken days later.

Steel later “clarified” that the pictures had been staged after his wife had lost her phone, which allegedly held the original pictures from Oct. 7.

Many Florida politicians had rallied around Sofia’s alleged mistreatment. Florida Governor Ron DeSantis even invited Sofia’s stepfather to speak at a press event on Oct. 20 (Steel appears around 21:30).

State representative Jason Fischer previously tweeted that “there’s a special place in hell for people who did this to Sofia.”

But with the parents’ claims now declared unfounded by police, users online are demanding an apology from those who promoted the story.

“Are you honorable enough to apologize for saying there is a special place in hell now and hat [sic] that claims have been investigated & are unfounded?” @laflynt asked.

“There is a special place in hell for the three @BrevardSchools Board Members who did this to seven year-old Sofia Steel,” Fine said in late Oct. “Please take two minutes and watch the comments I shared at the end of my committee meeting this week.”

As of November 28th, the GiveSendGo campaign set up by Steel has raised over $104,000 of its $200,000 goal and is still actively accepting donations. GiveSendGo did not initially respond to a request for comment.

The Steele family has also declined to comment publicly on the investigation’s findings.