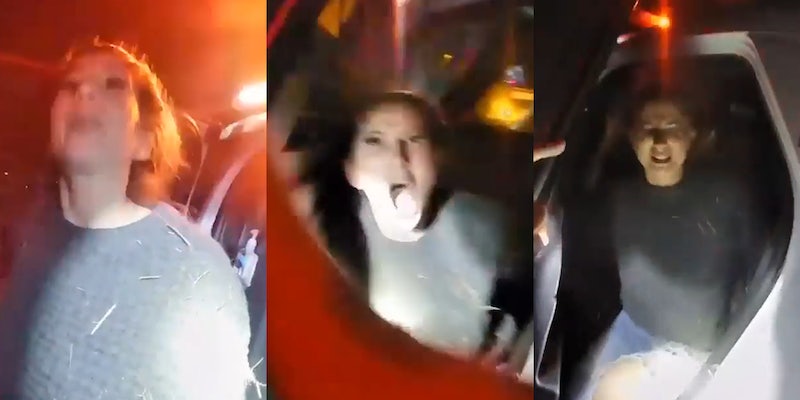 'Can you please just get me some water, baby?'

In a viral video, a woman grabs a police officer’s crotch and resists arrest by kicking and screaming. She is then pepper sprayed.

In the video posted on Reddit by u/IncognitoMyGuy on Aug. 2, a white woman named Jessica is asked to exit her car for driving without a valid license. As the officer is handcuffing her, Jessica says he touched her inappropriately, and then when being walked to his squad car, she wriggles to the ground.

“She also grabbed me by the testicles,” the officer says to another while the woman is on the ground. When Jessica is getting into the squad car, she spits in the officer’s face. She is then pushed into the squad car and begins kicking her legs and screaming that the office shouldn’t have “grabbed [her] like that.”

That’s when the officer sprays her with pepperspray. She still refuses to get into the car and dangles her feet out the doorway of the backseat. Officers then pull her into the squad car from another door.

“Can you please just get me some water, baby?” Jessica says to the officers. She calls the officers “baby” repeatedly as they pour water on her face to relieve her from the pepperspray and asks them to hold her hand.

u/IncognitoMyGuy, whose video got over 5,000 upvotes on Reddit, identified Jessica as a Karen, or a rude, disruptive white woman. The video was taken on Dec. 31.

Commenters on the video were confused by the woman’s actions, namely her calling the officers “baby.”

“The way she calls the cops ‘baby’ is super weird,” u/eeyore134 commented.

“I think that’s just a southern thing,” u/portamentos commented. “Calling someone baby when you’re trying to charm them.”

Others were just surprised by her behavior in general.

“She made the situation 10x worse for herself. What an idiot. Genuine stupidity right here,” u/anonymous78345 wrote.

“Feels like some small town ‘I can get away with anything’ type shit,” u/jl_theprofessor commented.

“I can’t tell if she’s high, drunk, or just a real piece of work,” u/devilishlydetermined wrote.

The Daily Dot has reached out to u/IncognitoMyGuy via Reddit direct message and the Columbia, South Carolina Sheriff’s Department via email.