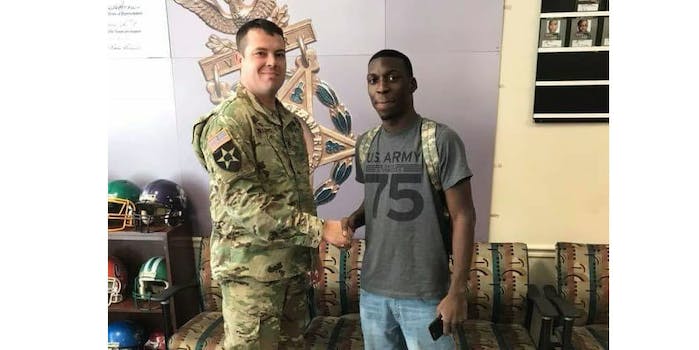 An 18-year-old boy and a 12-year-old girl were injured in the shooting.

Police shot and killed a Black soldier mistaking him to be the gunman in a shooting at an Alabama mall on Thursday evening.

Emantic Fitzgerald Bradford Jr., 21, was shot to death following a shooting at Riverchase Galleria in Hoover, Alabama, where an 18-year-old boy and 12-year-old girl were injured, the Hoover Sun reported. They identified him as a member of the military.

Hoover police Chief Nick Derzis originally identified Bradford as the shooter. By Friday evening, Hoover Police Department issued a statement that Bradford “likely did not fire the rounds” even though he may have been part of the altercation with the 18-year-old.

“The unidentified person was fleeing the scene when one of the police officers encountered him and shot and killed him,” Hoover Police Capt. Gregg Rector told local news.

The investigation was originally led by Jefferson County Sheriff’s Office because a Hoover police member shot Bradford, the Hoover Sun reported on Friday. However, the Hoover Police Department statement issued on Friday evening said the Alabama Law Enforcement Agency (ALEA) would take over the investigation.

The Daily Dot reached out to ALEA and the Jefferson County Sheriff’s Office for comment.

Activist Shaun King shared Bradford’s story on Twitter, posting photos of him with his family and from his time in the military. “He was the pride and joy of his whole family. Military service is a huge part of the whole family,” wrote King.

A conversation ensued following King’s choice to share a particular photo in which Bradford is posing in uniform with a hand gesture that some on Twitter say could imply a gang sign and dishonors his image.

I was thinking the same thing. I am positive that there are tonnes of better pics of this young brotha in uniform serving this country. This pic shows him out of regs with his cover turned backward and throwing up what could be considered a gang sign. #vetsagainstpoliceviolence

The shooting comes near the four-year anniversary of the death of  12-year-old Tamir Rice, who was shot by police while playing with a toy gun in Cleveland, Ohio, on Nov. 23, 2014. And just two weeks ago, a Black security guard was killed in Illinois after he apprehended a shooting suspect.