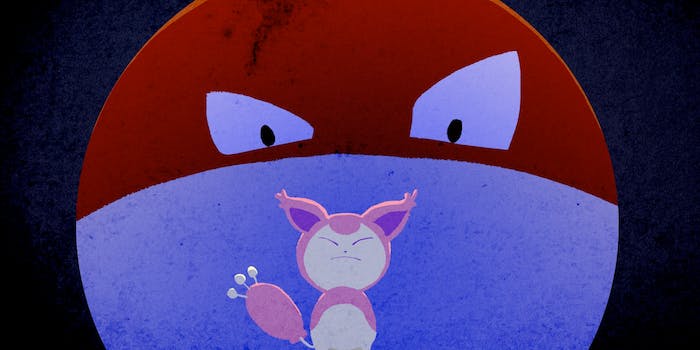 A man with social anxiety takes to Reddit to tell about being teased for playing the game at a park.

We all know there are a lot of Pokémon Go haters. And some have legitimate beef, like those who say the game is dangerous to play while black. Or those who are worried that they might be plowed into on the freeway by an overzealous player focused on a nearby Staryu instead of the road.

But the game has also been doing a world of good for some socially isolated gamers, especially those who suffer from mental health issues, like depression and anxiety, who now find themselves being drawn out into the world and interacting with other trainers.

Browsing Reddit, you repeatedly see phrases like, “I’m actually talking to people and meeting people!” and “It’s amazing that this game can bring together people.”  Some are posting photos of the diverse groups of people who are joining up to play the game in their communities.

But not every story is a heartwarming one about gamers finding interaction and social acceptance through Pokémon Go. There’s also this guy, who was enjoying the interaction and health benefits of the game when he was Pokébullied at a park by a group of strangers this weekend.

In a thread titled “I think I should just quit,” he tells his heartbreaking story:

I saw so many posts about Pokémon Go changing people’s lives, getting them out of their house, helping them make friends and I got so hopeful.

I have terrible anxiety and rarely leave my house. I also have a disability that makes it painful to walk. Between the anxiety and the pain, I don’t get much exercise. I’m overweight and I’m working on it, but it’s hard to stay motivated. Seeing how much fun everyone is having with Pokémon Go made me think this could help me too. Maybe it would make it easier to talk to people and motivate me to get more exercise.

I downloaded Pokémon Go yesterday and today I spent the whole day outside. I was still in pain, but I was having so much fun that I hardly noticed. I found other people playing and even though I was anxious, I said hello and I smiled at people. I met my fitbit goal without even trying.

Then I saw a park with three Pokestops and lures at every one! There must have been 30 people there. I was nervous about being around so many people, but I worked up the courage to walk closer.

As I got closer, a guy at a picnic table looked up at me and called out ‘Hey! There’s a Snorelax coming this way!’ I looked down at my phone, but when I heard all his friends laughing I realized he didn’t mean in the game. He meant me.

I went home and I don’t think I can go back out. I think I should just delete the game.”

Get it? ‘Cause a Snorlax is all round and pudgy? (And adorable, if you ask me.)

Luckily, the Reddit community isn’t having it, commenting, “Fuck those guys. You started a healthy habit and to stop because of that asshole would be counterproductive.” And “Don’t let these idiot people make you stop from achieving our dream! Which is being a damn Pokémon trainer.”

Internet, please do that thing you do and throw this guy a party, or invite him to join your training team or something. We can’t let the Pokémon bullies win.