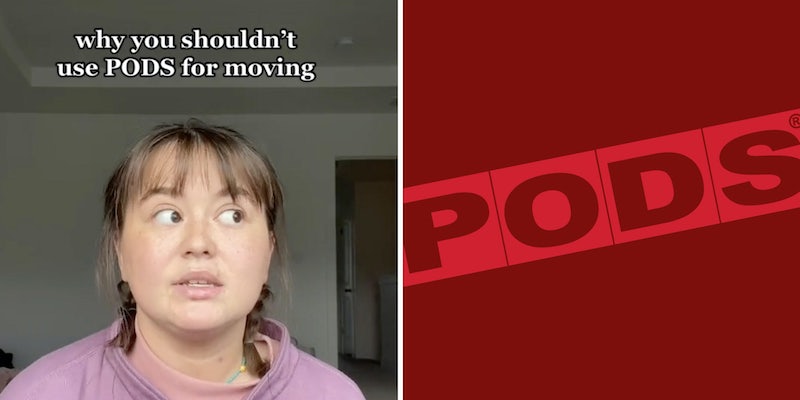 ‘I’m looking at it right now’: TikToker says PODS claimed to have picked up their moving pod—but it was still in their driveway

'No one would have known this was even a problem if it weren't for me and my husband.'

In a series of viral videos, a TikToker says that PODS claimed to have picked up her moving container, but they had not picked it up, causing a delay in the move of their items. The creator warns others to avoid using PODS when moving after her negative experience with the company.

The TikToker, known as Madi Stitches (@mad.stitches) normally uses TikTok to post about her embroidery business but felt compelled to speak out against the company. PODS, or Portable On Demand Storage, is a moving and storage company.

In the first of three videos talking about PODS, Madi shares the background information of why she decided to use PODS in the first place.

She begins the video by advising others who decide to use PODS to buy a cheap AirTag or other tracking device, put it in their pod, and connect it to their phone, so they can know where their pod is at all times.

@madi.stitches not my usual content but what else am I supposed to do when all my belongings are locked away #movingday #SearchForWonderMom #LaurelRoad4Nurses #movinghacks #podsmoving ♬ original sound – Madi Stitches

Choosing to go with PODS wasn’t cheap, Madi says. Renting and moving her PODS container from Wichita, Kansas to Utah cost about $2500. In comparison, she had also considered a moving truck, which she says would have cost about $1,000.

“We chose PODS because there was so much convenience in not having to transport our things ourselves,” Madi says in the video. “You still have to pack everything yourself, but not having to worry about driving a 16-foot truck was important to us, especially having to go through the mountains of Colorado.”

The TikToker adds that she and her husband went with the more expensive option of PODS because they’d heard good things about the company from friends and family.

In a second TikTok video, Madi says her POD was delivered accurately, and she and her husband filled it “to the brim.” It was when it came time for the company to pick up the POD from their old home in Kansas that they experienced problems, she says.

Madi says she and her husband were entirely packed up and ready to leave in their car with their cat, but they decided to wait to make sure their pod would get picked up before leaving.

“We wanted to see it get picked up just to be sure even though PODS says, ‘you don’t need to do that. You can leave,'” Madi says. “You do not need to see it get taken care of, that’s one of the things (PODS) promises you.”

The TikToker says the company told them the pod would be picked up between noon and 3pm on their scheduled pick up date. At noon of that day, a PODS driver called the couple to say they were on the way to pick up their pod. After about an hour, the couple tried calling the driver back to see where they were at because the local PODS location was only a half hour drive from their old home, Madi says.

After repeated unsuccessful attempts to get ahold of the driver, the TikToker finally got ahold of a different customer service representative with PODS. That worker told the couple they couldn’t do anything about the issue until their pickup window was over. The worker advised them to call back after 3pm but also told them they could leave the location and start their drive.

The couple decided to wait until their pod got picked up. Two minutes after 3 p.m., they called their driver one more time, and he finally picked up, Madi says. The driver told them he already picked up their pod, and claimed it was already in the warehouse.

“And my husband just goes, ‘Dude, I’m looking at it right now in our driveway,’ and the driver is just silent,” the TikToker says in the video. After the “moment of silence” on the phone, the driver says he’s on his way back.

After another 30-minute wait, the driver finally arrives and picks up their pod, Madi says in a third video. During that wait time, the couple got on the phone with another customer service worker, who told them the mix-up happened because of an internal issue with the PODS system.

Due to an unexplained issue in the system, Madi’s pod was labeled as empty and staying in Kansas, she says. The entire move to Utah was canceled.

The TikToker explains that the couple had already been charged for the move. After the incident, they had to spend hours on the phone with customer service.

At the time that Madi recorded the TikTok videos, she and her husband still didn’t have any of their belongings. She says they went thrifting to make up for the things they needed immediately, and they were trying to “make it work.”

“It’s not so much that it’s late that bothers me,” Madi says in the video. “I think it’s the fact that no one would have known this was even a problem if it weren’t for me and my husband being the anxious people we are and watching it happen.”

“We could have left, like they promised. Most people would have just left and left their POD there, and we could have called them later and been like ‘hey our pod, did it get picked up?’ and they would have said ‘yeah,'” the TikToker continues in the video. “And our pod would probably still be sitting in that driveway back in Kansas right now if it weren’t for the fact that we proactively went after this.”

The Daily Dot reached out to TikToker user @madi.stitches via TikTok comment and to PODS via press email.