No, Hugh Hefner did not tell rapists to "stop ruining sex for the rest of us."

1) Make a donation to the National Organization for Women

3) Decide to take a bold stand against rape culture by turning Playboy‘s annual party-school guide into a lesson about consent.

But that’s OK, because a rosily optimistic fake-Playboy fanfiction called Party With Playboy did. Don’t be fooled: It’s a fake website that skinned Playboy’s website as part of a consent awareness project. The group behind the project also created replicas of BroBible (“Hugh Hefner Says Rape’s Not Bro“), Huffington Post, and others—but the sites that got ripped off ain’t even mad. This is one hoax that has excellent advice for everyone.

Every year Playboy releases the ultimate guide to campus life: our infamous party school list. Over the years, it has been brought to our attention that some of our long-standing party picks have a not-so-toast-worthy, rape-ridden side to their campus life.

Somewhere in the countless hours we spent tallying up co-eds and scoring beer pong, we lost track of the most essential element of the Playboy lifestyle: sexual pleasure. Rape is kryptonite to sexual pleasure. The two cannot co-exist. For our revised party guide to live up to our founder’s vision, we had to put a new criterion on top. Namely, consent.

In our new found light, we proudly present to you Playboy’s 2013 Top Ten Party Commandments, the ultimate guide for a consensual good time.

Party With Playboy even included this infographic: 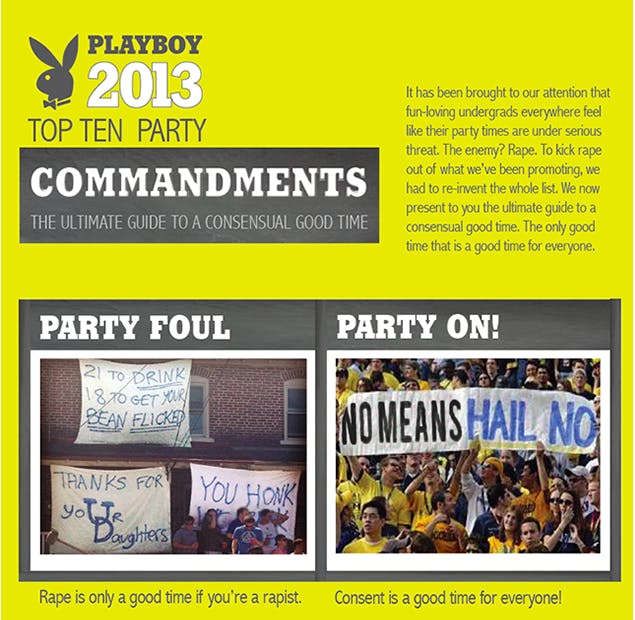 The fake Playboy party guide does a much better job in a single graphic of promoting informed consent, diversity, and non-heteronormative kinds of sex than the actual magazine has done… well, probably ever.

And an interview with “Hugh Hefner”:

When I first started publishing the magazine, the biggest threat to sexual pleasure was puritanism. Playboy was the antidote to puritanism. And I think if you look at the past 50 years, history is on my side.

(UPDATE: ThinkProgress dug up the source of the campaign—it’s a Baltimore-based feminist organization called FORCE: Upsetting Rape Culture, which bills itself as “a creative activist collaboration to upset the culture of rape and promote a culture of consent.” Read more here.)

Let’s be serious—could you ever really imagine the real Playboy urging you to “Love all bodies”?  Nah. Meanwhile, on actual Playboy.com, there’s a (NSFW) picture of a naked woman wearing a giant arrow pointing to her crotch. The picture is housed under a folder called “assets,” because… OK, that’s probably an accident.

The Hugh Hefner of Fake Playboy is a noble visionary who says things like “Today, the biggest threat to sexual pleasure is violence” and “I did not accumulate sex as if I was accumulating money. And, I am richer for it.” (Where can one sign up to be a Bunny for Fake Hef?)

The hoax puts the sites being parodied in an awkward position, because anything less than enthusiastic support is a PR nightmare—but too much enthusiasm, at least in Playboy‘s case, might make its own site look sadly lacking in ethical responsibility when it comes to promoting consent and combating rape culture. 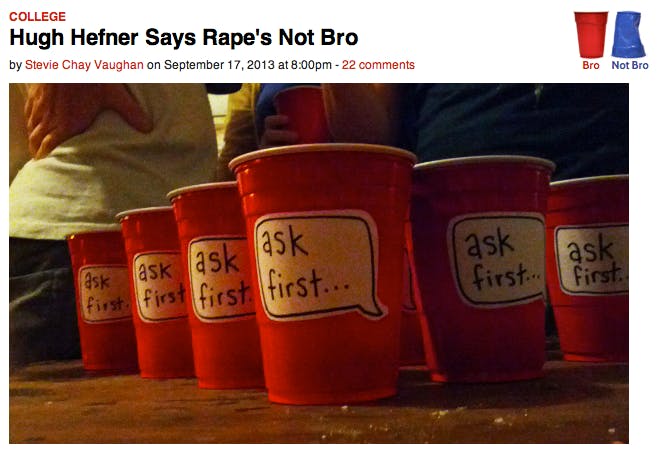 BroBible hedged its bets, stating that it would have preferred not to have been ripped off, thanks, but can’t fault the message behind the mixup:

Even though this is a pretty clear case of brand infringement to our site, Playboy, and the Huffington Post, we’d be remiss to say that we do agree with the overall messaging, if not the way it was delivered. … But, parody and brand infringement aside, we’d be remiss to say that we do think BroBibles was a clever and smart way of starting a conversation about consent. We whole-heartedly agree with the message. And with so many people fooled by it, it goes to show that the world is safe for bros to be feminists too.

Maybe someday. But not, we’re guessing, in the pages of Playboy—unless a campaign like this forces its hand.