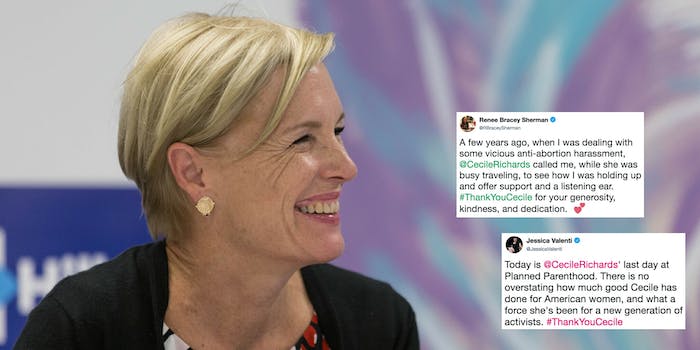 After 12 years as president of Planned Parenthood, Cecile Richards is officially stepping down today. Rightfully so, the internet is thanking her and celebrating her advocacy for access to reproductive healthcare.

The daughter of Democratic Texas Gov. Ann Richards, Cecile Richards has carved out her own legacy, tirelessly expanding and defending reproductive justice against the country’s toughest anti-abortion politicians and pundits. She advocated for Democratic Texas Sen. Wendy Davis during her anti-abortion legislation filibuster and campaigned for Democratic presidential nominee Hillary Clinton. Within her role as president, Richards has also expanded access to reproductive healthcare for transgender patients, worked with Congress to include copay-free birth control under Obamacare, and shut down patently false anti-abortion claims in front of a squad of angry congressmen.

Even in the last year of her tenure, Richards has defied several attempts from the federal government to withhold federal funds from Planned Parenthood—even the sneakiest of fruitless attempts made by so-called women’s advocate Ivanka Trump. (Planned Parenthood did not respond to the Daily Dot’s request for comment regarding Richards’ last day.)

After 12 incredible years, Planned Parenthood President @CecileRichards is stepping down. Here’s how Cecile has changed the game for Planned Parenthood and our movement for reproductive rights: https://t.co/Jl5WZ6Lt8H #ThankYouCecile pic.twitter.com/JP7takFP9p

Using the hashtag #ThankYouCeclie, women and men are paying tribute to the soon-to-be-former Planned Parenthood president. From Call Your Girlfriend podcast host Aminatou Sow, to Teen Vogue digital editorial director Phillip Picardi, admirers of Richards’ and supporters of the healthcare organization are sharing anecdotes for how her leadership, and the organization she presided over, helped them in their careers and lives.

“Today is [Cecile Richards’] last day at Planned Parenthood. There is no overstating how much good Cecile has done for American women, and what a force she’s been for a new generation of activists,” writer Jessica Valenti tweeted.

On the Clinton campaign, I loved moderating press calls with @CecileRichards, @ilyseh & @Schriock1 and hearing the support these women gave each other and Hillary. We are lucky to have them–and I know Cecile will keep fighting for women in whatever she does. #ThankYouCecile

One of the bravest women I know is @CecileRichards. On behalf of a generation of women who watched you lead in awe- #ThankYouCecile

After 12 years, @CecileRichards is stepping down from @PPact today. #ThankYouCecile for leading the way and showing the next generation of women how to stand up and fight for our rights. This moment would not be possible without you.

#ThankYouCecile, for believing in @TeenVogue before anyone else did. I am forever in awe of your sterling leadership — and how you always stood your ground. Planned Parenthood has never been stronger, despite our current government…and YOU did that! Here’s to your future. pic.twitter.com/jQZyYPWGWn

I learned from @CecileRichards what it means to be a leader, a working mom and an activist for women. I’ll never forget an epic road trip with her and @GloriaSteinem in Ohio 2006. #ThankYouCecile for changing the course of my professional life.

Have to salute @CecileRichards today for her brilliance, courage and leadership on behalf of women as she departs from @PPact. She is also a lovely person. #ThankYouCecile

#ThankYouCecile for being a badass woman in charge, for refusing to compromise on our rights, and for standing up with poise, humor, and grace against every single challenge. @PPFA has literally saved lives because of your spine of steel. I’m proud to be a donor & a patient.

#ThankYouCecile for never backing down when times were tough. And thank you for inspiring me to apply for this job by being honest about how you were nervous on your way to your first interview with Planned Parenthood. https://t.co/li5DApcJ3B

Several people shared stories of how Richards reached out to them personally in times of turmoil, letting them know that she was with them.

“A few years ago, when I was dealing with some vicious anti-abortion harassment, [Cecile Richards] called me, while she was busy traveling, to see how I was holding up and offer support and a listening ear. #ThankYouCecile for your generosity, kindness, and dedication,” Renee Bracey Sherman, a reproductive justice advocate, tweeted.

.@CecileRichards stood by me when I was arrested at a protest in honor of Alton Sterling just one month into my new role at @PPFA.

Cecile is an amazing leader and I’m honored to have worked with her. #ThankYouCecile pic.twitter.com/PKYoNVRLqi

As soon as Trump was elected, @CecileRichards called me. She knows what it’s like to be a woman leading an organization under siege. She told me Planned Parenthood had our back.#ThankYouCecile, you exemplify the kind of thoughtful & determined leadership that we all aspire to. pic.twitter.com/bEBLyNgDdc

A few years ago, when I was dealing with some vicious anti-abortion harassment, @CecileRichards called me, while she was busy traveling, to see how I was holding up and offer support and a listening ear. #ThankYouCecile for your generosity, kindness, and dedication. 💕 https://t.co/UThEsC9ozg

Richards’ daughter Lily Adams, the director of communications for the office of Democratic California Sen. Kamala Harris, even tweeted a touching tribute to her mother with a photo of their family.

For 12 yrs, Mom has put her heart & soul into running Planned Parenthood. On her last day, it’s impossible to express what this org has meant to her & our family.

We can’t wait to continue to support it as a few of the 11 million supporters across the country. #ThankYouCecile pic.twitter.com/T1NVQhfNip

Social media accounts for Planned Parenthood and its current and former employees also shared well-wishes with Richards, as did the co-writer of her book Make Trouble, Lauren Peterson.

On behalf of @ppglobe and our over 100 partners across Africa and Latin America, we want to thank our dear friend @CecileRichards for her tireless advocacy for women, girls and families around the world. #ThankYouCecile pic.twitter.com/PgpteeIXxG

Rallying in the snow, traveling the country to meet Planned Parenthood doctors & clinicians, standing up to 5 hours of grilling from politicians — whatever she was doing, @CecileRichards pushed the mission of Planned Parenthood forward. We are all so grateful. #ThankYouCecile pic.twitter.com/TwrX3vIKw6

After 12 years, today is @CecileRichards last day as our fearless leader at Planned Parenthood.#ThankYouCecile for your courage, for being an inspiration, for never giving up and for pushing us all to do the same. pic.twitter.com/YEXtnltggP

#ThankYouCecile for so many things, but especially for all the those thank you notes, birthday cards and encouraging emails you send your team. It means a lot to be seen and supported by someone we so admire. Here’s to your next chapter, @CecileRichards! 🥂🍦💖 pic.twitter.com/kP7rJeIz3o

Today is @cecilerichards’ last day as president of Planned Parenthood. #ThankYouCecile for giving me my first job as a speechwriter and for lifting up and encouraging young women in every meeting, on every call, every day for the last 12 years. pic.twitter.com/GkkddupsaO

After an amazing 12 years as the fearless leader of @PPact, my former boss & forever heroine @CecileRichards is moving on to her next big adventure. I can't wait to see what's next! #ThankYouCecile for teaching me how to #maketrouble & for fighting for all of us. pic.twitter.com/fis8fPsXDo

Even politicians joined the hashtag, sharing their admiration of Richards and her legacy.

“[Cecile Richards] has been an incredible champion in the fight for women’s health and an exemplary leader of Planned Parenthood. I appreciate her commitment to quality, affordable health care in the face of relentless attacks,” Democratic California Sen. Dianne Feinstein tweeted. “#ThankYouCecile I can’t wait to see what you do next!”

.@CecileRichards, it is thanks to your tireless leadership that @PPFA's doors have stayed open, no matter what, for millions of patients who depend on it as their trusted medical provider.#ThankYouCecile! I know that whatever you do next, you will continue to lead and inspire. pic.twitter.com/noMP0mDHJi

@CecileRichards has been an incredible champion in the fight for women’s health and an exemplary leader of Planned Parenthood. I appreciate her commitment to quality, affordable health care in the face of relentless attacks. #ThankYouCecile I can’t wait to see what you do next!

#ThankYouCecile for your tireless dedication to women's healthcare. Your steadfast strength has saved lives, expanded access, and furthered #ReproRights despite relentless attacks.

For my daughter, granddaughter and women everywhere, we are all grateful. pic.twitter.com/LV5xANV6h9

For your many years of passion, love and plain old fashioned fight for the men and women @PPFA serves, #ThankYouCecile! Can’t wait to see what you do next!

“There is a takeaway here for aspiring hell-raisers: We get only what we’re willing to fight for—nothing more and, I hope, nothing less.”—@CecileRichards#ThankYouCecile for your tireless work to ensure women's health and safety. You've helped millions gain the care they need.

#ThankYouCecile for helping American women, men, and families thrive. You've done an incredible job at the helm of the @PPFA these past 12 years! https://t.co/hIuHMaSlCl

“Cecile departs Planned Parenthood with more members, supporters, donors, and activists than ever before. Her devotion to reproductive health and rights is far from over, and she’ll continue to be a voice and advocate for women and girls in the U.S. and around the world,” the healthcare organization wrote in a blog post regarding Richards’ departure. “From the bottom of our hearts, we thank Cecile for her incredible leadership over the past 12 years. We can’t wait to see what she’ll do next.”