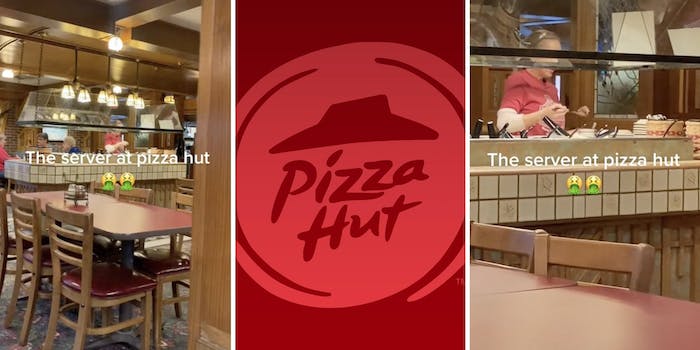 ‘That’s why I don’t do the buffet or the salad bar’: Pizza Hut server appears to eat from buffet’s soup ladle in viral TikTok

'I'd be leaving without paying.'

A viral TikTok shows a Pizza Hut worker appearing to eat directly from the soup ladle at the buffet. “The server at Pizza Hut,” the text overlay reads.

“This whole place is on something,” says Josh Hampton (@fupasweat), who uploaded the clip on Monday. In the clip, the server is ladling soup into what looks like a takeout container and licks the ladle as well as eats from a regular spoon out of the ladle, then puts it back.

“She’s literally eating out of the container,” another person is heard saying.

As of Wednesday, the clip has over 1.1 million views.

According to the comments, Hampton “called her out and told management” before posting the clip to TikTok. Commenters also said this incident took place at a Pizza Hut location in Indiana and a general manager saw it within hours of it being posted and fired the woman.

Some commenters remarked how “if she’s an employee she’s done it before, to be so bold to do it on the floor.”

Other TikToker commented “that’s why I don’t do the buffet or salad Bar.”

“Buffets and potlucks are a NOPE!” Another said.

“Omg…. I’d be leaving without paying,” someone else commented.

The Daily Dot has reached out to Pizza Hut via email and Hampton via TikTok comment.