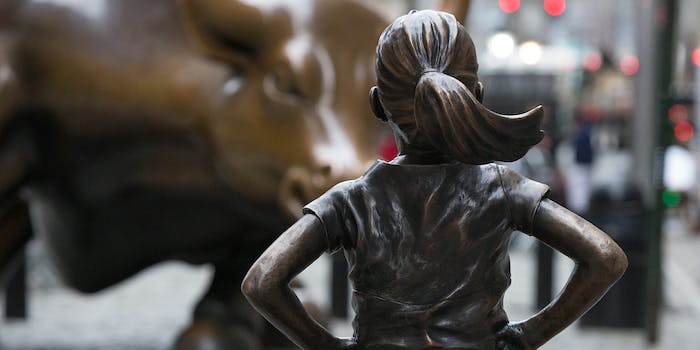 It has since been taken down.

A new statue was erected on Wall Street on Memorial Day, and its presence, while short-lived, was quite controversial.

In response to Kristen Visbal’s “Fearless Girl,” unveiled on International Women’s Day, sculptor Alex Gardega added a dog peeing next to the female statue’s left leg. Called “Pissing Pug,” Gardega created the piece to criticize the Fearless Girl’s placement opposite Arturo Di Modica’s “Charging Bull.” He argues that the statue was a marketing ploy and that its erection by State Street Global Advisors was an attack on Di Modica’s artistic intention.

“This is corporate nonsense,” Gardega said to the New York Post. “It has nothing to do with feminism, and it is disrespect to the artist that made the bull. That bull had integrity.”

While some have critiqued the pug’s less-than-stellar quality, Gardega says that this was intentional. By making the Pissing Pug look aesthetically upsetting, he wanted to show how the Fearless Girl is “downgrading” the Charging Bull.

“I decided to build this dog and make it crappy to downgrade the statue, exactly how the girl is a downgrade on the bull,” he continued.

However, the Pissing Pug wasn’t around for long. NBC New York reported that Gardega removed the statue on Monday, only three hours after he installed it. “I took it away personally,” he told NBC. “I didn’t want to leave it to be taken and certainly had no rights to bolt it to the ground.”

Some agreed with Gardega and felt that the statue captured Americans’ gripes with corporate marketing campaigns, arguing that the Fearless Girl never truly represented women to begin with.

Others said that it targeted young women. While Gardega insisted that the statue wasn’t anti-feminist in nature, many on Twitter disagreed, saying that the image itself was an action of degradation. As TED Talks social media editor Ella Dawson noted, even if “Fearless Girl” was made with “corporate BS” intentions, it doesn’t mean that it didn’t inspire a lot of young girls and visually show a message of empowerment.

Fearless Girl IS corporate BS. But its symbolism took off, inspiring thousands of girls. And you peed on it, but you're "not anti-feminist"? pic.twitter.com/vjj5JpEm2K

Others criticized Gardega himself, noting that despite his insistence he’s not anti-feminist, he seems to have some anti-women, pro-right-wing viewpoints. A look at his Facebook account reveals he previously attacked Hillary Clinton and President Obama, and likes posts citing Milo Yiannopoulos and Alex Jones.

He's also a "happy person". And not a petty mean-spirited douche at all. Happy person. Yes.