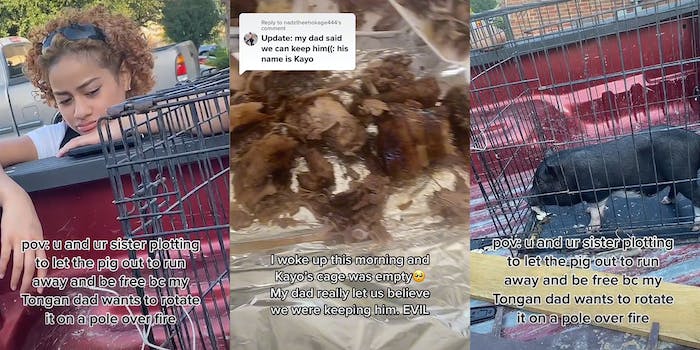 ‘I thought my dad changed… people never change’: TikToker saves pig from being eaten only for her father to roast it

In a viral series of videos, TikToker Nadia (@nadztheehokage444) and her sister are watching over a pig in the back of their dad’s truck bed as they debate about releasing the animal.

“POV: you and your sister [are] plotting to let the pig out to run away and be free because my Tongan dad wants to rotate it on a pole over a fire,” the overlay text said. The TikToker used the trending sound by Esosa that repeats “I wanna go home.”

The video implies the pig was intended to be roasted for puaka tunu, a classic Polynesian and Tongan meal. In the caption, Nadia writes, “I promise you [I’m] not eating no puaka tmro.”

I promise you im not eating no puaka tmro

In the comments section, users debate over if the sisters should release the pig or not.

“I hated watching my uncles do it. But then I always ended up eating it,” one user commented.

“I almost tried today but my dad got to it before me,” a third user shared.

In an update comment, Nadia revealed to her followers that her father let the sisters keep the pig and they named him Kayo. However, in a follow-up video, Nadia said that her pig did not make it through the night.

“I woke up this morning and Kayo’s cage was empty,” she said, “My dad really let us believe we were keeping him. EVIL.”

“I thought my dad changed… people never change,” she added.

Nadia proceeded to show the cooked pig on the table as the family made their plates.

The comments section sympathized with and mocked the TikToker’s sadness.

“No way he just granted approval of u basically being attached just to be like SIKE,” one user commented.

“Tell the truth, did u get a plate?” a third user asked. Nadia replied and said “I didn’t lay a finger on Kayo. It’s the OGs who ate it uppp to the crumbs.”