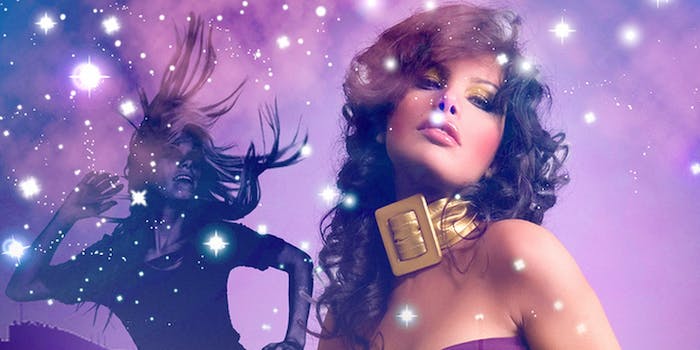 One woman's selfie ended up with a completely different context after this Instagram account got to it.

Today on the Frisky, writer Carrie Nelson tells the story of a taking an unadorned selfie on a Sunday morning, and posting it  to Instagram, like thousands of users do. She explains she’d recently been “struggling with depression, anxiety, and overcoming trauma”:

“Without thinking much about it, I snapped a selfie with my iPad. I took a photo of myself in bed, still disheveled from a restless night of sleep. More than anything, I was curious to know what I looked like in that particular moment. What I saw was a face that captured so much of what I have been feeling recently: exhaustion, sadness, and determination. Somehow, I managed to make all of those emotions visible and beautiful, in one snapshot of my face.”

Later that night, after seeing the Instagram account @photoshop_fantasy had started following her, she noticed her morning selfie looked completely different. Someone had taken the snapshot and given her a makeover by adding makeup, thus completely changing the personal context of her original photo:

The account only has a handful of photos so far, and claims that a follow will get you a Photoshop makeover, if you tag a certain photo with #PsFantasy. But Nelson never mentions using that hashtag. A quick browse through the account will reveal a few things: The photos are all women, the Photoshop jobs are bad, and while most of the “makeovers” include simply adding makeup, some of them are extremely questionable.

In this before and after, the woman’s skin and eye color has been lightened:

And here, a woman’s face is closer to a cartoon character than an adult human:

As Nelson notes, this brings up last week’s Jezebel story on how selfies are a cry for help. This caused many on Twitter to counter that straight, white argument with their own definition of selfie, including many women of color. For people of color and those in the LGBT community, selfies can indeed be an affirmation, a statement of existence, which makes the whitewashing of @photoshop_fantasy even more troubling, as does the use of the word “fantasy.” Whose fantasy is this, exactly?

It also brings up the issue of image appropriation on Instagram and Facebook, and just what those sites can do with your likeness. Nelson asked the account to take down her before and after, but so far, it remains on the site.