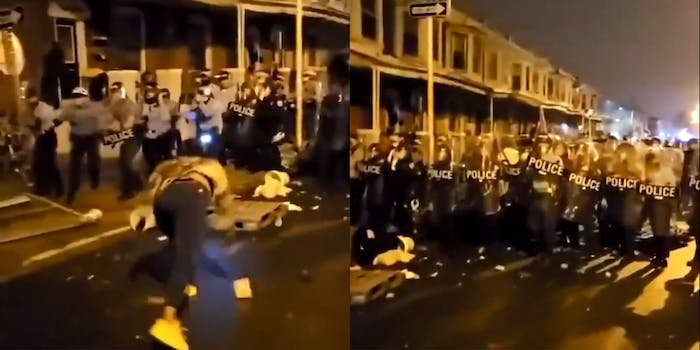 Protests erupted on Monday night in Philadelphia after police shot and killed a 27-year-old Black man carrying a knife whose family said he suffered from mental health issues.

The Philadelphia Inquirer identified the slain man as Walter Wallace Jr. Footage of the police shooting circulated on social media on Monday. Graphic video shows Wallace walking toward two officers with guns drawn, who then shoot at him multiple times.

Wallace’s mother screams in horror as he collapses in the street, and several other onlookers crowd around his body. The man filming the video yells, “Y’all didn’t have to give him that many fucking shots.”

Wallace died at a nearby hospital, the Inquirer reports. The Philadelphia Police did not immediately respond to the Daily Dot’s request for comment.

Many people on Twitter slammed the officers who shot Wallace for not trying harder to de-escalate the situation.

“I have successfully de-escalated a Black man with a knife having a mental health crisis without shooting or killing him,” public health researcher Alexandra Hunt tweeted. “Alternatives are possible. People MUST be prioritized. Black skin MUST be decriminalized. There is no justification to Walter Wallace Jr’s death.”

Wallace’s father, Walter Wallace Sr., echoed this sentiment while talking to the Inquirer, saying that his son was taking medication and asking, “He has mental issues. Why you have to gun him down?”

Others slammed the police in general and placed the shooting of Wallace in a string of police killings of Black people in 2020.

“If you’re Black, you could be next,” @MoonDunIt tweeted. “It’s officially open season on us because the Calvary [sic] ain’t coming. The Federal Government is a White Supremacist support organization.”

Hundreds of Philadelphians mobilized to protest in the hours following Wallace’s shooting. A video on the r/PublicFreakout subreddit shows protesters lobbing a trash can and other objects at police in riot gear.

Other videos on Twitter show dozens of protesters chasing cops down the street and hurling other objects at them.

Several buildings were looted and at least a dozen officers were injured over the course of the night, the Washington Post reports.

The Philadelphia District Attorney’s Office will investigate the shooting, according to a statement from District Attorney Larry Krasner (D). The two officers involved have been taken off duty pending the investigation, the Washington Post reports.

John McNesby, president of the Philadelphia Fraternal Order of Police Lodge #5, defended the officers who killed Wallace in a statement on Monday.

“Our police officers are being vilified this evening for doing their job and keeping the community safe, after being confronted by a man with a knife,” his statement reads. “We support and defend these officers, as they too are traumatized by being involved in a fatal shooting. … Our thoughts and prayers are with these police officers who had to use lethal force to keep themselves and the community safe.”

Several Twitter users condemned McNesby’s statement, with @Nateszen summing it up thusly: “If you think the only course of action when faced with someone holding a knife is to shoot them, you shouldn’t be a cop.”