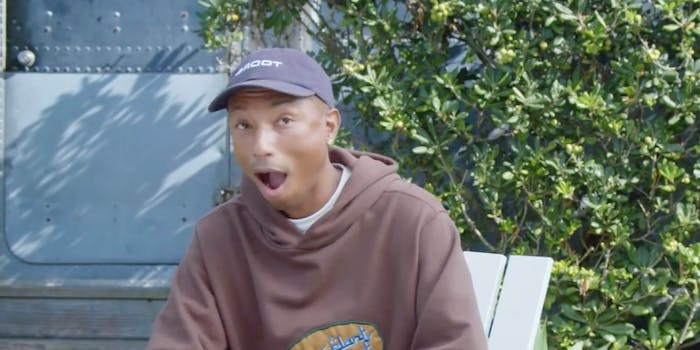 'Imagine asking the people who most likely are being laid off right now to donate.'

Amid the destruction that COVID-19 has caused, celebrities, organizations, and other (vastly more wealthy) people have started charitable efforts for those affected around the globe. Well-meaning (and rich) music and fashion mogul Pharrell Williams wanted to jump in and tapped social media on Tuesday. It didn’t quite go the way he thought it would.

Using his 10-million plus Twitter following, Williams launched a GoFundMe campaign for first responders working on the frontlines of the novel coronavirus. The Virginia native is working alongside Flexport.org Fund at CAF America.

“Hospitals are running low on masks, gowns, and other critical items. We need to replenish their supplies,” Williams tweeted, along with a link to the campaign. “Take action, make a donation, and ask others to join the fight. We’re in this together. Let’s protect the responders on the frontlines.”

The problem, of course, is Williams’ blindness to the fact that the pandemic has simultaneously turned into an analysis of disaster capitalism (and capitalism as a global system) and the hoarding of wealth—especially in light of the rich purchasing preference in COVID-19 testing and treatment. On top of that, the wealthy are showing apparent ignorance of regular people’s growing economic hazards in this age of COVID-19.

For those reasons, Williams’ campaign was met with online furor.

“Celebs asking working ppl who are filing unprecedentedly high unemployment claims, and will spend the next few months agonizing over loss of income.. to donate ….. brilliant,” Twitter user @daniecal wrote.

Many began going in on his estimated $150 million net worth.

“You have millions donate yourself,” Twitter user @vodkabooty wrote.

To Williams’ credit, Arnold Schwarzenegger donated $1 million, Gwyneth Paltrow gave $100,000, and Twitter co-founder Jack Dorsey donated $25,000 to the campaign. An anonymous person also donated $250,000. The fund has grown well over $3 million, a third of the goal of $10 million.

The open dispute, though, quickly became about whether Williams and other moneyed figures should be asking for common folk for money. People pointed at Williams’ opulent lifestyle as to why he should be funding the effort himself, not leading the drive.

“Read the room my guy. Read the room,” Twitter user @Jaeandthecity wrote, before pointing to his palatial estate he is currently trying to sell for $17 million.