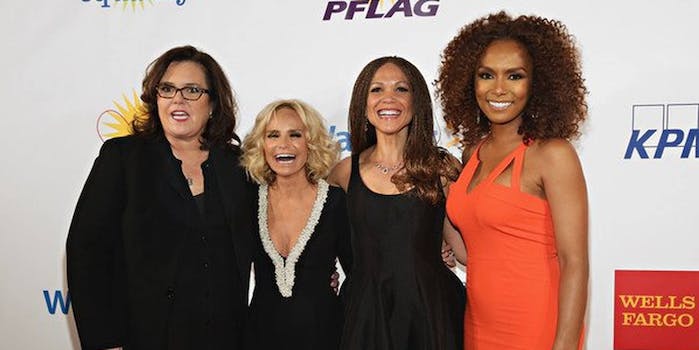 Celebs open up about LGBT rights, dating at PFLAG awards

At PFLAG’s eighth annual Straight for Equality awards Monday, there were as many LGBT celebrities as straight ones. It’s a traditional event where the lesbian, gay, bisexual, and transgender community celebrates straight allies who show a devotion to pushing equality forward—and it doesn’t hurt that about $60,000 was raised in the process.

For actor and comedian Alec Mapa (Ugly Betty, Switched at Birth), who hosted, the PFLAG mission hits close to home. Mapa is a gay, married father of an adopted son. At age 50, he’s also old enough to remember a time before schools had gay-straight alliance clubs like the one his son will soon encounter in middle school.

“We didn’t have that. Back then, it was called drama club—that was our gay-straight alliance,” joked Mapa, speaking with the Daily Dot on the red carpet at the New York event.

“PFLAG’s work is more important than ever. Every time a religious freedom bill pops up or is signed into law, it’s because they don’t know LGBT people,” Mapa said. “But we’re here, we’re ever-present, we were always here. And when you get to know us, it’s harder to discriminate against people you actually know.”

Founded in 1972, PFLAG originally stood for Parents and Friends of Lesbians and Gays and was created in order to help family members adjust to the then-controversial reality of having an LGBT loved one. The organization now boasts more than 400 chapters in cities and towns across the U.S. and elsewhere—and approximately 200,000 members.

With the growth of LGBT visibility comes a certain nonchalance in large cities, where lesbian bars have all but disappeared from lack of use and nearly every high school has a gay-straight alliance club of some sort. But in small towns and conservative areas, new PFLAG chapters are still popping up.

As PFLAG President Jean Hodges pointed out from Monday night’s podium, the newest chapters added to the fold are in Oskaloosa, Iowa; San Marcos, Texas; and Waterville, Maine. In those places, the population ranges from about 10,000 to 55,000 residents.

Actress and singer Kristin Chenoweth grew up in such a small town. In Broken Arrow, Oklahoma, Chenoweth learned early on the importance of acceptance—which she credits not only to her Christian faith, but also to her mom’s teaching.

“My friend was called a ‘dyke’ when I was in the third grade,” Chenoweth told the Daily Dot on Monday just before being presented with the Straight for Equality in Entertainment award. “I asked my mom what that meant, and she explained to me that we don’t use that word, that we love people no matter how God made them.”

Gee do you think @AlecMapa was excited to meet @KChenoweth at all at the @PFLAG gala? pic.twitter.com/BQQDOyAEfa

It doesn’t hurt that Chenoweth has a few notable relatives, either, she said: “Everybody’s got their gay cousin.”

Chenoweth’s award was presented by her good friend Rosie O’Donnell, who gave a moving speech that referenced growing up in a home with an abusive father.

“I grew up knowing this: That a young girl needs to use her voice,” said O’Donnell from the stage. “A young woman needs to demand equality. Because it will not be given readily.”

O’Donnell, who has five children of her own, told the audience that she “never had a need for PFLAG” until she found herself married to a woman from a homophobic Southern Baptist background (ex-wife Kelli Carpenter), and tricked Carpenter’s mother into attending a PFLAG meeting.

Later the now-single O’Donnell told the Daily Dot that she once tried online dating using Match.com, but quit after she quickly saw someone she knew: “An actress who’s gay and well-known. And I remember thinking, wow—how did that happen?” O’Donnell joked about using a dating site for celebrities she dubbed HeyI’mFamous.com.

Honestly what could be better than @Rosie and @AlecMapa at the @PFLAG gala if u know plz tell me pic.twitter.com/Bzs4btycjV

One not even need to be single to cruise today’s hookup apps. As Mapa told the Daily Dot: “My husband and I both have Grindr. We look at it like, at the bank or in line at the supermarket.”

For the other honoree, Straight for Equality in Media award winner (and former MSNBC host) Melissa Harris-Perry, LGBT status is inseparable from everything else that makes up a whole person. After fellow network host Janet Mock presented her award, Harris-Perry reflected on the intersectional nature of identity.

“It’s odd to hear things like ‘LGBT politics are the civil rights movement of our time,'” said Harris-Perry from the podium.

“No, they are all of these, at every point, the civil rights movements of our times: race, sexual orientation, sexual freedom, gender, self-presentation, gender self understandings, labor, immigration status, queer identity,” Harris-Perry continued.

Harris-Perry’s speech was notably emotional in tone. Toward the end, the Wake Forest University professor addressed the cancellation of her MSNBC show with tears in her eyes before finishing off with a salute to “Nerdland forever” and a standing ovation from the crowd.

Oh she TRIED it. Phenomenal speech from @MHarrisPerry which *almost* made me cry out my gold eye shadow #S4EGala2016

Many of the speakers were careful to nod to attendee Edie Windsor, whose United States v. Windsor lawsuit resulted in the historic 2013 Supreme Court ruling that eradicated the Defense of Marriage Act (DOMA) and paved the way for marriage equality.

Windsor understands the issue of intersectional identity as well as anyone, having spent years working as a woman in a male-dominated computing field. 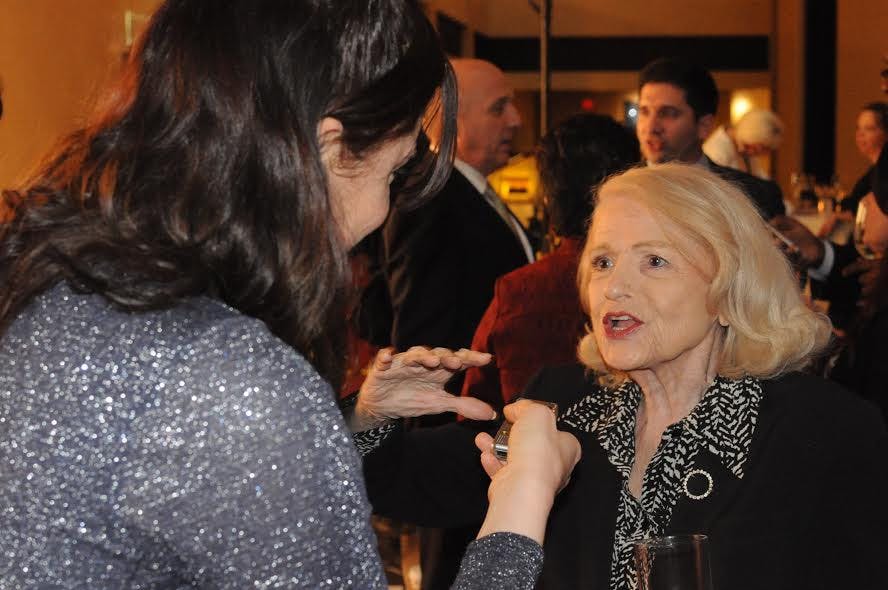 “My career was at IBM primarily,” Windsor told the Daily Dot at the PFLAG event. “There were a lot of lesbians in those days. Very often, people say ‘Oh you were the first.’ I was in a special group at IBM and I promise you one-third of the people there were smart women mathematicians.”

At age 86, Windsor is one of the oldest members of the organization Lesbians Who Tech. She told the Daily Dot that she’d recently returned from attending two of the group’s events in New York and San Francisco, and was stunned to be in a room with about 1,500 queer women in the industry.

But dating, as an LGBT senior citizen, is a different story. Though Windsor shied away from telling the Daily Dot about her current romance, she grew passionate while discussing a project she helped spearhead at New York’s LGBT senior organization SAGE called Talk Before You Walk.

“A lot of our members are living on various kinds of funding and should be very careful before they decide to marry,” Windsor said.

As for her own dating life, Windsor didn’t seem to be lacking in options. Despite her status as one of the original lesbians who tech, Windsor said she’d managed to avoid online dating altogether.

“I’m not interested in that,” Windsor said. “I use the Internet a great deal, but not for dating.”