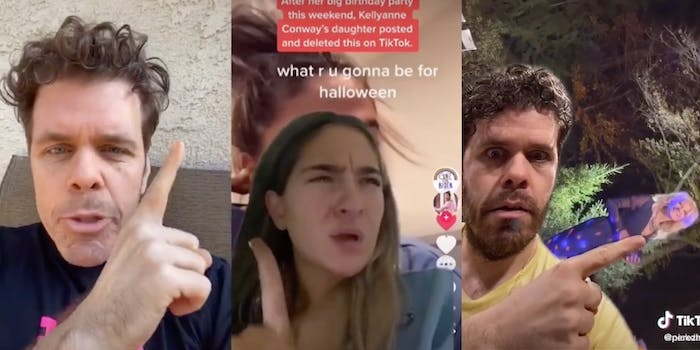 She fired back at him for sharing a private video she posted to TikTok.

Perez Hilton is clashing with 16-year-old Claudia Conway over her recent birthday bash, along with his decision to share a private video she uploaded to TikTok expressing suicidal thoughts.

Conway has been criticized in recent days after she and her mother hosted a backyard birthday party that seemed to get out of control. Video of the event uploaded to social media showed no social distancing and many people not wearing masks.

After the footage went viral, the TikTok star posted on Snapchat that her family initially followed New Jersey’s guidelines for socializing during the pandemic, and ultimately kicked everyone out when strangers showed up and things got out of hand.

However, people were still highly critical of the decision to host a party amid COVID-19, especially considering Conway has been outspoken against others breaking social distancing guidelines this year—and considering both Claudia and Kellyanne Conway tested positive for the virus not too long ago (but have reportedly recovered).

“And #ClaudiaConway is complicit in this too!” he wrote. “She was all dressed and made up and happily there!”

Hilton later reposted a video the younger Conway had only shared with her mutual friends on TikTok in which she expressed suicidal thoughts and wrote “I hope this won’t end up being the case but I just can’t do this anymore.”

Conway later explained her perspective on the party further in a series of videos, followed by a single video calling Hilton out for sharing her private TikTok with the public.

“I posted this friends-only looking for support from my mutuals and adults are making fun of me for literally having depression,” she said. “Is there something fucking wrong with you?”

Rather than let it go or remove his video, Hilton doubled down, saying he never made fun of Conway and that his sharing her post was justified because the teen “chose to become a public figure.”

“She chose to become an advocate and has been very critical of everybody going to parties and throwing parties. And she and her mother threw a big party,” he said.

A follow-up video from Hilton dived back into the party itself, and he shared photos of both Claudia and Kellyanne not wearing masks or social distancing during the event.

“In [Claudia’s] videos, she repeatedly criticized those that attended for not wearing masks or practicing social distancing,” he said. “She should be criticizing herself.”

As of Wednesday night, Conway has again announced a temporary departure from TikTok over her frustrations with public obsession and criticism of her.