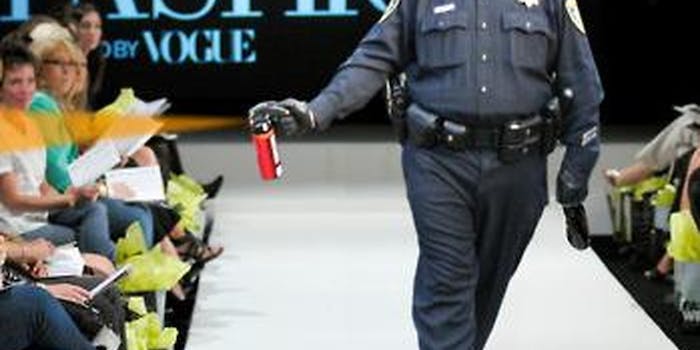 The University of California has agreed to pay $1 million in a settlement with the victims of "Pepper Spray Cop" John Pike, who used "unreasonable force" during a November 2011 campus protest.

The University of California will pay $1 million to settle a lawsuit brought by students who were pepper sprayed by a university police officer during a campus protest last November.

Each of the 21 victims will receive $30,000, while their lawyers will split $250,000, the Associated Press reported. Another $100,000 will be set aside by the school for any other victims who can prove they were injured or arrested.

On Nov. 18 a group of students protesting tuition hikes at the University of California Davis were pepper sprayed by Lt. John Pike after they refused to move. Some students vomited while others suffered burns to their lungs.

Following the incident, Pike was turned into a popular meme, with Internet users posting images of the officer holding a pepper-spray can in almost every scenario imaginable—from the Beatles’ famous Abbey Road photo to a trip to the North Pole.

Pike, who earned  $110,243.12 annually, was put on paid administrative leave in August. He will not face any criminal charges, the New York Post reported.

“[T]he Yolo County District Attorney’s office said in a statement that there was insufficient evidence to prove the use of force was illegal,” the Post reported. “A task force appointed by the university concluded in April that the Nov. 18 pepper-spraying was ‘objectively unreasonable’ and could have been prevented.”

The plaintiffs in the case against the university were represented by the American Civil Liberties Union. The decision made Wednesday “is subject to the approval of a federal judge,” the AP added.