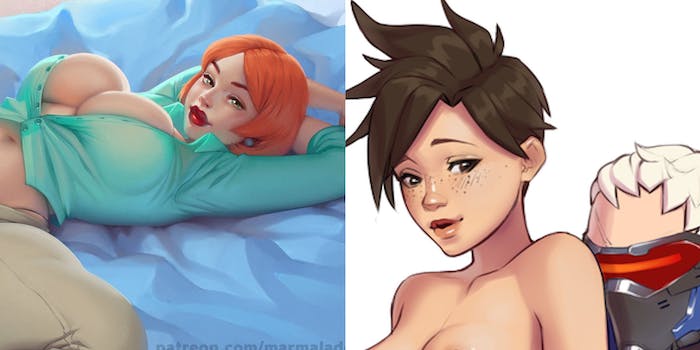 On July 22, Marmalade Mum posted a screenshot from her Patreon of two users refunding their $10 pledge over “bigotry and racism” in the Discord server and the artist’s “antisemitic viewpoints,” respectively. In response, Marmalade Mum mocked her critics and posted screengrabs from the anti-Semitic conversation within her Discord. In it, a patron claims that “a disproportionate amount of wealthy businesses” are “Jewish owned or operated.” After a user called out the claim as racist propaganda, Marmalade Mum responded with “racism is prejudice + power. Jewish people have way more power than anyone.” The anti-Semitic claim that Jewish people control the world dates back centuries and is common fascist propaganda.

Two users immediately left the Discord and pulled their Patreon pledge over Marmalade Mum’s comments. A third user, who is Jewish, explained that the Jewish people are not a race but an ethnicity, as Ashkenazi Jews are white. After they announced they would cancel their Patreon subscription because Marmalade Mum’s Discord is a “hateful and ignorant hub that [they could not] get behind,” Marmalade Mum responded by saying “today I learned that the holocaust was a white genocide,” mocking all three users on Twitter.

Marmalade Mum continued to double down. When Twitter commenter pointed out Marmalade Mum is “drowning” in Nazi propaganda, she replied, “Drowning in redpills, dude. I just found out about this shit today! Have you looked into it man? Shit’s whack.”

Marmalade Mum has referenced more obvious right-wing talking points, as well. In a response to YouTube fighting misinformation on coronavirus, Marmalade Mum equated YouTube’s actions to the Supreme Court case where a straight baker refused to provide a marriage cake to a gay couple.

“[B]akeries are under no obligation to cater for gay weddings but look at how you people reacted to that. It’s funny how the left switches on when they believe in free speech,” she wrote. “Pretty sure people being allowed to say what they want on social media is a lot more important.”

While most of Marmalade Mum’s political opinions come in hints, her bigotry is sometimes more overt. After Blizzard revealed Soldier 76 from Overwatch is a gay man, Marmalade Mum made fun of the announcement by having him “make love with another gay character,” a lesbian named Tracer. The image showed Soldier 76 inseminating Tracer, followed by a second photo with Tracer pregnant while having straight sex with the gay player character. Marmalade Mum justified her pictures by claiming Blizzard’s queer characters were akin to “propaganda” and “virtue signaling.”

“Gay mommy tracer! This could be a TLC series!” she wrote. “Sorry, leftwitter. Tracer is pro-life in my headcanon!”

When a user implied her original image was “like firing a shotgun directly into a hornet’s nest,” she declared, “I’ve survived a commie witch hunt once before” and proceeded to joke about being misgendered, learning “how to pilot a helicopter,” and posted an image of Japanese ultranationalist Otoya Yamaguchi assassinating Japan Socialist Party leader Inejiro Asanuma. All three jokes are popular among the alt-right, with one referencing far-right Chilean dictator Augusto Pinochet pushing political dissidents out of helicopters. The idolization of Yamaguchi is common among far-right figures such as Gavin McInnes.

Marmalade Mum’s comments, her popular fanbase, and her eagerness to make fun of her offended patrons beg the question of whether the NSFW community has a watchdog to protect marginalized users from popular bigots. Either no one speaks up out of apathy, silent agreement, or fear for their own safety, enacting a chilling effect within the NSFW community. One r/GamerGhazi user lamented that “nobody seems to give two shits” that “Marmalade Mum is a Nazi.”

“I feel like I’m the only person who’s noticing this because nobody is calling her out or even saying a damn thing about this massive elephant in the room,” the user wrote. “With what she felt comfortable saying in public, if the NSFW artist community is willing to excuse that kind of thing, they’re enabling it to propagate further.”

Given Patreon now monitors creators outside the platform, it remains unclear if Marmalade Mum has violated the site’s Community Guidelines on hate speech.

The problem is not just alive and well; it’s actively growing. One fan replied to Marmalade Mum’s Discord thread with Pepe the Frog in an SS uniform pointing an assault rifle at an anti-Semitic caricature of a Jewish man.

“I’ve got them in my sights,” the user tweeted, “awaiting orders to take em out.”

Marmalade Mum did not comment on the tweet but has since liked posts stating “shameless Jewish nepotism” will “[hijack an] entire industry,” and that the “family tree of every media person in a position of power” proves her anti-Semitic beliefs.