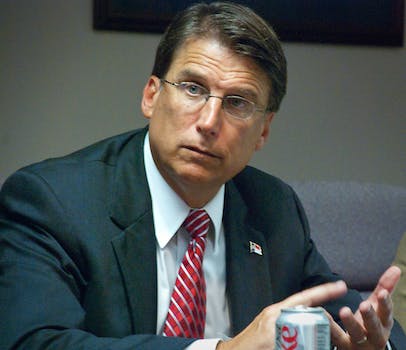 Gov. Pat McCrory, famous for his anti-trans house bill, is not giving up just yet.

The contentious governor’s race in North Carolina remains too close to call.

Wednesday evening in Raleigh the State Board of Elections ordered a 94,000-vote recount in Durham County. The board voted 3-2, along party lines.

The expensive recount could take another week, and cost thousands, according to ABC 11’s Jonah Kaplan.

On Wednesday afternoon Democratic candidate Roy Cooper surpassed North Carolina Republican Gov. Pat McCrory by 10,000 votes in the state gubernatorial race, seemingly making Cooper the governor-elect of the state and pushing past the recount-eligible threshold. But citing alleged “irregularities” in the election count, the board leaves the race at the mercy of the recount.

McCrory became famous for his anti-trans bathroom bill, House Bill 2, which required that transgender people use bathrooms corresponding with their biological sex and not their gender identity.

Cooper, who previously served as attorney general, disagreed with the bill saying that it “writes discrimination into our law,” according to NBC Charlotte. HB2 was signed into law in March in the state of North Carolina but exit polls showed at least two-thirds of voters opposed the bill, which may have contributed to McCrory’s slide.

The people of NC have made clear that they want a change of leadership in the Governor’s Office — and that’s what we’re going to give them. pic.twitter.com/Rzg9R2VQ9E

Cooper would be one of the few powerful Democrats in North Carolina. He believes politicians should not have influence over what doctors think is best in terms of abortion, that women deserve equal pay, campaign contributions from corporations should be limited in government, various gun restrictions need to be maintained, and the government should expand and fund Obamacare.