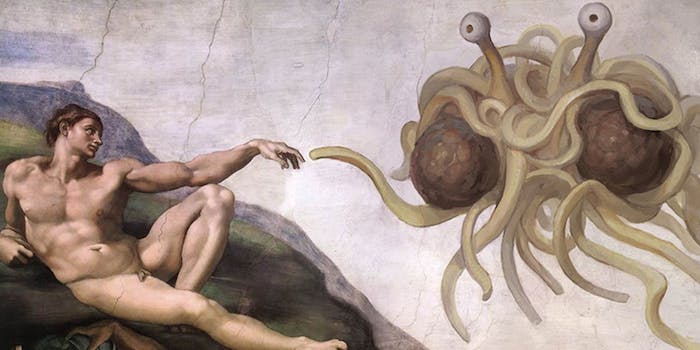 Man with pasta strainer on his head wins religious victory

Brno, Czech Republic, has recognized the legitimacy of the Church of the Flying Spaghetti Monster.

Lukas Novy is a resident of Brno, in the Czech Republic, and last month, he challenged the country’s religious equality laws, demanding to wear a spaghetti strainer on his head in the photo for his ID card. Novy is a “Pastafarian,” and his religion requires that he wear the strainer at all times.

Pastafarians are followers of the Internet-based religion the Church of the Flying Spaghetti Monster, which holds that a divine being made out of spaghetti and meatballs created the universe, that every Friday is a religious holiday for members, and that pirates were the original Pastafarians. 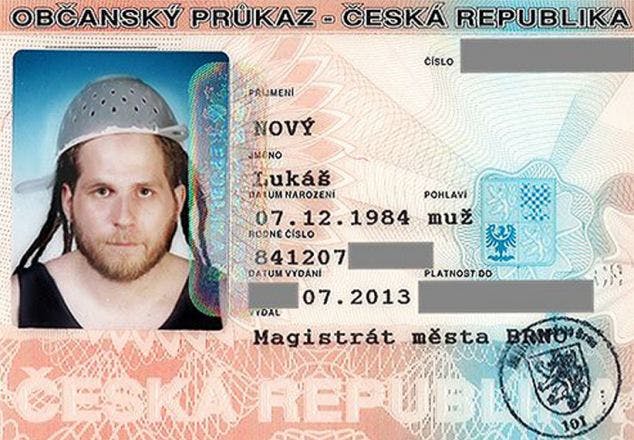 It’s easy to think of CFSM as a joke religion, but its origins stemmed from a real ideological issue with the Kansas State Board of Education’s decision to teach intelligent design, but not evolution, in classrooms. In 2005, college student Bobby Henderson wrote an open letter to the Board, asking them to consider the Spaghetti Monster in the larger design, and taking a stance against what he perceived as misinformed Christian propaganda. What started as satire has become its own organized religion, with chapters in the U.S. and Europe.

So, Novy’s case is just one more push for Pastafarian religious equality in the public consciousness. Novy actually succeeded, and was allowed to wear his pasta hat in the ID photo, which means the Czech Republic officially recognizes Pastafarianism as a legit religion. A Brno City Hall rep explained that his application “complies with the laws of the Czech Republic where headgear for religious or medical reasons is permitted if it does not hide the face.”

This isn’t the first time a CFSM member has challenged the ID issue, either. In July 2011, an Austrian man named Niko Alm was granted permission to wear the pasta strainer in his official ID photo. On his blog last month, he wrote of another Austrian man who was legally allowed to wear the official headgear. Seems like a movement is afoot.