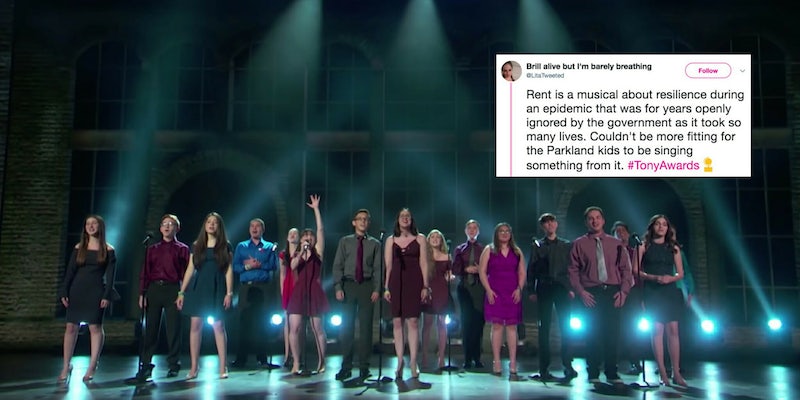 Their resilience is palpable.

Student survivors of the Marjory Stoneman Douglas high school shooting in Parkland, Florida, brought down the Tony Awards Sunday night, during a tear-inducing performance of “Seasons of Love” from the musical Rent.

The touching performance followed a prize for excellence in theater education awarded to the school’s drama teacher, Melody Herzfeld, who protected more than 60 students inside her classroom during the shooting. Herzfeld has led more than 50 productions at Stoneman Douglas since 2003, according to the New York Times. A week after the shooting, her students performed the original song “Shine” at the CNN town hall on gun violence.

The award, given annually to a K-12 theater teacher by the Tony Awards and Carnegie Mellon University, includes a $10,000 prize for Herzfeld’s theater program.

“All the goodness and tragedy that has brought me to this point will never be erased,” Herzfeld said while receiving the award one hour prior to the televised portion. “We all have a common energy. We all want the same thing. To be heard. To tell our truth. To make a difference. And to be respected. We teach this every day in every arts class.”

Later, during the telecast, Glee actor and 2005 Tony nominee Matthew Morrison introduced the performance, recalling his and other Broadway performers’ involvement in a benefit concert for Parkland months ago. After the event, one of the students involved in the benefit, Tanzil Philip, reached out to the Tonys, asking to appear on the telecast to thank the Broadway community for their support during the students’ time of need.

Instead, the Tony Awards invited the school’s drama department students to share the stage that night, allowing the Broadway family to “give and say thanks to you,” Morrison said.

The performance began with a standing ovation, with many attendees leaping to their feet to show their support for the students involved. Broadway performers themselves were seen displaying overwhelming emotion and tearing up at the performance.

They weren’t alone. Online, many reacted to the performance with similar emotions of sadness coupled with joy, dubbing the moment tear-jerking if not outright heartbreaking.

The Marjory Stoneman Douglas High School drama department singing "Seasons of Love." I don't know how to process this but I know I'm tearing up. #TonyAwards

Weeping as the kids from Parkland high perform at #Tonys2018 pic.twitter.com/eN4QeluQ0z

THE PARKLAND KIDS ARE SINGING SEASONS OF LOVE AND WE ARE ALL SOBBING. #TONYAWARDS

OMG the drama students from Marjory Stoneman Douglas HS are at the #TonyAwards singing Seasons of Love and I'm bawling.

Wow none of this was in rehearsal and I'm in tears. #TonyAwards

The performance delivered by the students was more than a statement of resilience, but also a measure of growth, calling the endemic of mass school shootings for what it is—a problem that has yet to be addressed by the people in power, but that the students will elevate in the time being.

"Seasons of Love" is the song that asks how one quantifies the value of a year in a human life. It's long acted as the heartfelt response to the HIV/AIDS epidemic of the '80s/'90s.

Today, it's also the response to another epidemic: School shootings. https://t.co/o6p2PdlqCx

The Parkland students have been through hell & they're signing about the power of love.

We must work so that hell happens #NeverAgain.pic.twitter.com/F5SXUNef4S

Theater kids will save us all.

However, the performance didn’t go without critique. Viewers noticed that the drama students performing onstage were mostly white, and questioned why there were few people of color. The performance similarly reflected late critiques of the #NeverAgain movement launched by Marjory Stoneman Douglas students—that most of the student leaders were white, while Black students had to later wrangle media outlets for the same attention.

Glad that the parkland students are taking center stage, but I do want to remind y'all that the Black Students of Parkland had to have a totally different press conference just to be heard.
No one continued to follow their story.

The “Seasons of Love” performance sparked users to wonder who at Marjory Stoneman Douglas, a mostly white school, can participate in the drama department. Perhaps the financial prize given to Herzfeld can help her introduce other students of color to the arts.

In a statement to the Times, Herzfeld said she would normally feel “humbled and grateful” to be recognized, but that the award meant so much more because her students “have taken to action through speech, performance and passionate honesty.”