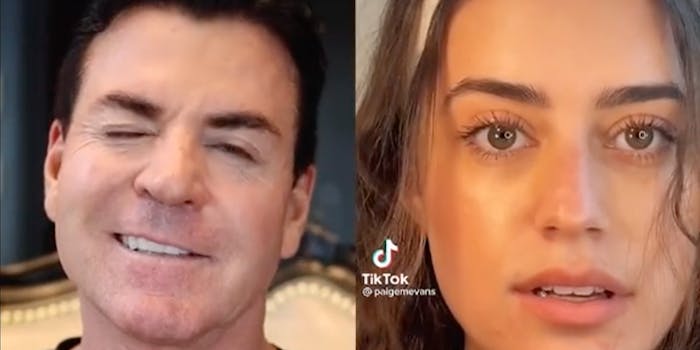 ‘Did anyone else feel violated?’ Papa John’s founder called ‘creepy’ for flirty video with young TikToker

'What did I just watch.'

The Papa John’s founder is being dragged online for his flirtatious TikTok duet with a Canadian actress, who is 38 years younger than him.

In Madison’s original video, posted in March, Evans reenacts a scene from the Fleabag.

“Don’t flirt with him,” the audio says as Evans mouths along.

“I am not going to flir-,” Evans “says,” not finishing the sentence because she presumably she sees a man, who is out of the camera’s view. In the original video, she goes on to shake herself off and says, “Fucking hell.”

Schnatter then duetted her video, pretending to be the man she is stunned by. His portion of the video begins with only the backside of his chair showing. He then turns his chair around to reveal his presence to Evans before striking a flirty expression: nodding his head and winking.

People commented on the post, calling it everything from “creepy” and “sad” to “saucy.” While the video was posted in April, much of the criticism was posted in May.

“Why would you do this to that poor child?” wrote one user.

“’What did I just watch,” a third questioned.

“Did anyone else feel violated when he winked?” another asked, per the Daily Mail.

However, Evans, herself, seems to find Schnatter’s duet endearing. “Omg hey papa,” she commented on his duet the same day he posted it.

“Thanks for enjoying a laugh and having a sense of humor!” he responded on Wednesday, almost two months after she commented.

His video has garnered 2.4 million views so far—exceeding the usual number of views he gets on his TikTok content.