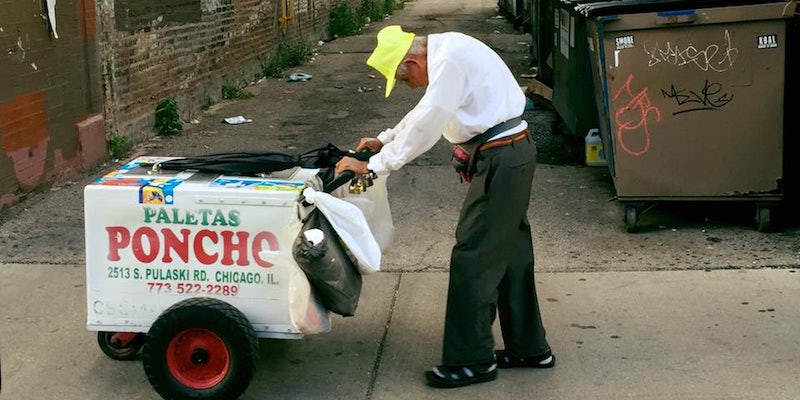 Man raises over $140,000 for 89-year-old popsicle vendor who pushes cart uphill every day

The paleta seller recently had to come out of retirement after his child died.

When restaurant owner Joel Macias was driving down 26th Street in the Little Village area of Chicago, he saw a 89-year-old paleta vendor struggling to push his cart up a hill.

Macias stopped and bought 20 paletas, or Mexican fruit popsicles, and gave the man $50. He then posted a picture of the vendor on Facebook with the caption, “I respect this man to the fullest.”

His post received over 400 shares and 200 likes, and that’s when Macias and his friend had an idea. He’d found out the vendor, Fidencio Sanchez, had retired but had to recently return to work after the death of his only daughter. So they set up GoFundMe page, where Macias explained:

Mr. Fedencio Sanchez and his wife recently lost their only daughter and are still heartbroken about the situation. His elderly wife was selling paletas also to help pay bills, but she fell ill and can’t work anymore. We’re trying to raise money to help him with whatever we can. Anything helps. Let’s all pitch in and help make life a little easier and brighten both of their day.

Gustavo Gutierrez, who provides the paleta cart to Sanchez, told DNAinfo, “He’s a really hardworking gentleman. He’s always giving. He already got the advice from everybody to take it easy and stop doing it. He just doesn’t want to. He’s like a little kid. He wants to get going.”