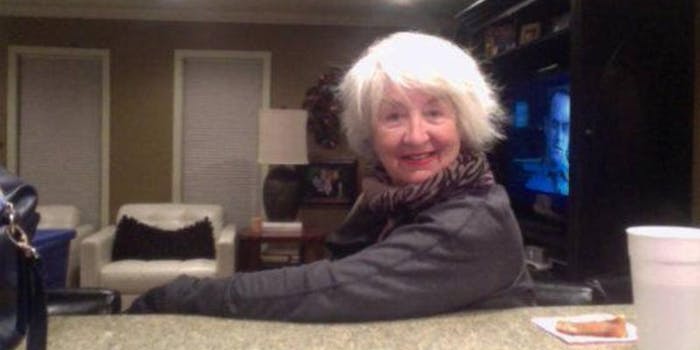 A Vine has surfaced of University of Oklahoma SAE “house mom” Beauton Gilbow saying the n-word repeatedly, setting off a firestorm of racial controversy at the university.

The video in question:

Gilbow was formerly the house mother, or fraternity supervisor, for the Sigma Alpha Epsilon (SAE) fraternity. Oklahoma University no longer recognizes the fraternity after footage of group members chanting the n-word surfaced earlier this week.

When the video was originally released, Gilbow expressed disbelief at the fraternity brothers’ racist behavior. Yet the above Vine appears to show her in engaging in it herself.

Upon the dissolution of the SAE chapter, Gilbow set up an IndieGogo page to raise some money for herself now that her livelihood was gone. That page is now dismantled.

A similar fundraiser for Howard Dixon, SAE’s African-American chef who also finds himself without work, is still going strong.

Son heard us discuss OU SAE; said, "Daddy why don't people look at the inside instead of the outside?" We should all be as wise as 4-yr-olds

OU Facilities Management is taking the letters off of the SAE house @OUDaily pic.twitter.com/9juu4UaTvF