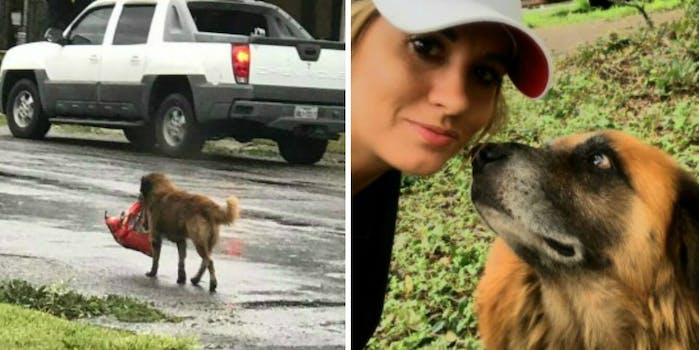 The storm wasn't too rough for Otis.

With Hurricane Harvey ravaging much of Houston and the Texas coast this weekend, the stories emanating from inside the storm were mostly devastating. But a dog named Otis allowed social media users a brief moment of levity, and now, we know exactly who he is and why he’s become such a viral star.

It started on Saturday when Otis escaped from his family’s home in Sinton, Texas, and a woman named Tiele Dockens saw him, thought it looked like he was “on a mission,” and posted to Facebook a picture of him with a bag of dog food in his mouth.

This dog is walking around Sinton TX carrying a entire bag of dog food with him. LOL #refugeePSA: Owner is found. He is not a stray he just got out on his street.Dogs name is Otis.

Dockens told the Washington Post she followed the German shepherd mix until he was outside his family’s house in Sinton—about 30 miles northwest of Corpus Christi.

“This lady comes by and tells me, ‘Is that your dog coming down the road?’” Salvador Segovia told the newspaper. “And I turn around, there comes Otis, and he’s carrying food!”

Otis entered the front porch, dropped the bag of food, and lay down. It’s unclear exactly where Otis got the dog food—Segovia guessed he might have pilfered it from the nearby lumber store, though it also could have been from Otis’ personal stash—but, according to the Post, Otis is quite the dog about town. Wrote the newspaper:

Otis was a local celebrity in Sinton long before he became a viral sensation. Everywhere Otis went—at the county courthouse, local antique shops, the grocery store—everybody seems to know him. And people always feed him …

Otis also likes to take off alone, and he knows his way around town. Sometimes, he goes to the local Dairy Queen, where someone gives him some ice cream or hamburger, Segovia said. He likes to stop by a local lumber and building supply store that sells dog food. The owners always feed him.

“Otis is a smart dog,” Segovia said. “He knows where to go pick up a treat.”

Otis is a smart dog, sure. But now we all know that he’s also a very good dog who makes people feel better in times of turmoil.