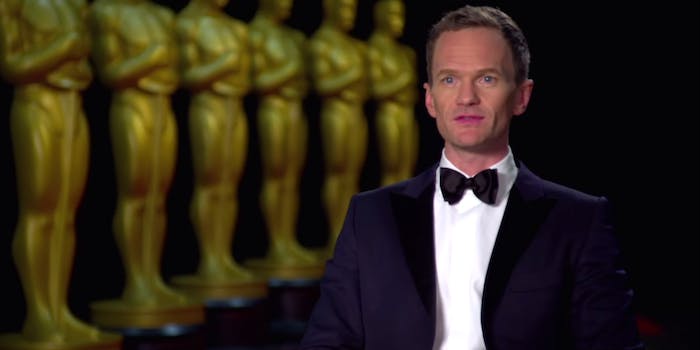 For those who were rooting for some Oscar fashion fiascos, the 2015 ceremony may have been a disappointment. All the stars were styled to within an inch of their lives, which was good news for them but bad news for fans of red carpet disasters and eccentricity.

To gently ease into the night’s red carpet coverage, we’re going to begin with a couple of actresses who consistently look like flawless princesses wherever they go.

That being said, while “fairytale princess” is many women’s Oscar dress dream, it’s not actually all that interesting to talk about. Which is why we’re going to move on to this very educational photo of Scarlett Johansson.

One more @Versace for the night: what do you think of #ScarlettJohansson's edgy look? #Oscars2015 pic.twitter.com/QtaDsZoZ4f

Now, obviously Johansson is richer and more beautiful than we can ever hope to be. But even given a ton of money to shop around designer stores, there’s no way to replicate the effect of a custom-fitted dress. It’s typical for A-list stars to have their clothes fitted specially for the Oscars, but in this case you can really see how it works.

As anyone with an hourglass figure can tell you, it’s hard to find dresses that fit all over, especially if they’re not made from stretchy material. In these photos of Scarlett Johansson, you can see the darts of fabric (the curvy triangular bits around her ribcage and hips) that make the dress fit close to the contours of her body. This gown even turned those fitted sections into a design feature, showing how the fabric reflects light differently when panels are sewn in different directions.

This wasn’t a very daring year for Oscar fashion, which is why we were so glad to see Marion Cotillard. She has enjoyed a fruitful relationship with Dior for the past few years, and this gown is a great example of the way Raf Simons has modernized the brand since taking over as creative director in 2012. It’s also reminiscent of the Gaultier dress Cotillard wore when she won her Oscar in 2008, although some people did seem to think it made her look like a piece of sushi.

At the other end of the fame scale, we have filmmakers Ellen Goosenberg Kent and Dana Perry, who won for their short documentary Crisis Hotline: Veterans Press 1. They’re a great example of one of our favorite awards ceremony subcategories: non-celebrity women who win prizes for their work behind the camera. (See also: Laura Poitras of Edward Snowden documentary Citizenfour.)

Precious few women were nominated in non-acting categories this year, so it was exciting to see Perry and Kent go up and say their piece—although the orchestra made an effort to play them off. (You can watch their movie on HBO’s YouTube channel, by the way.)

As is always the case, there were a few actresses who cosplayed as parodies of themselves, the most obvious being Jennifer Aniston in her sparkly beige gown and Gwyneth Paltrow in minimalist pale pink. Meryl Streep represented the badass older lady contingent, presumably because Tilda Swinton skipped the ceremony to ride through the Scottish highlands on a wild unicorn (or whatever it is she does in her spare time).

We’re not going to make fun of Goop or her shoulder flower because Twitter has already done that job for us, and to be honest there were some far more mock-worthy outfits on show. Such as Jared Leto, who appears to have dressed as your mom’s disreputable prom date from 1978.

For the most part, the men all wore variations on the same outfit: the classic black tux. It kind of makes us wish for a reverse #AskHerMore campaign, where red carpet reporters studiously concentrate on questions about men’s suits while ignoring their achievements.

Eddie Redmayne and Hannah Bagshawe arrive at the Oscars. http://t.co/h40cQis7ND

Selma‘s David Oyelowo is our top pick for men who made an effort to stand out. But in the interests of accurate coverage, we’re going to finish up with a photo of what all the other dudes looked like—or wished they looked like: Chris Evans, looking handsome yet approachable in a simple black tux. By all accounts a very nice guy, he even brought one of his old high school buddies as his date.