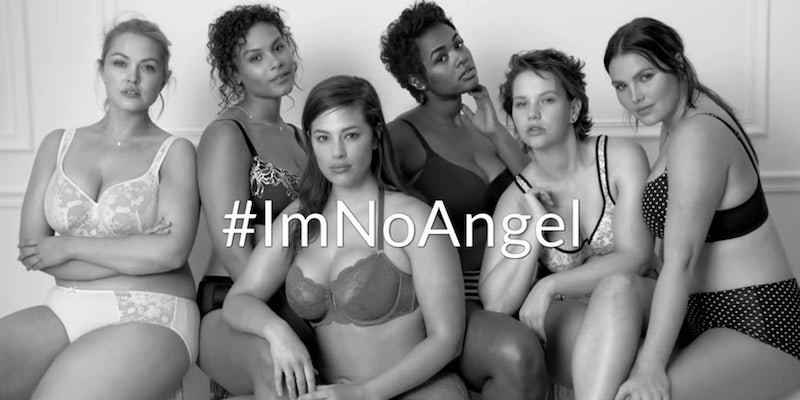 Orthodox Jews are furious about these plus-size lingerie ads

A representative of the Orthodox Jewish community is demanding that the provocative ads be taken down.

A New York councilman is calling for the plus-size clothing company Lane Bryant to remove its new ad campaign from subways because Orthodox Jewish constituents find them offensive.

Should kids be forced to see @MTA subways wrapped in models wearing only their underwear? I think not. What say u? https://t.co/TcU0eJdd0Z

David Greenfield represents the Brooklyn neighborhoods of Bensonhurst, Borough Park, and Midwood. Lane Bryant’s viral #ImNoAngel ads, which depict plus-size women in their underwear, appear on the F train, which runs through his neighborhood.

Those neighborhoods are home to many observant Jews who often dress extremely modestly. Greenfield says the ads are too “lewd” for his constitutents’ taste.

“Our local neighborhoods are not Times Square. These are where families live and children walk the streets,” Greenfield told NY1. “It’s not just subway riders who see these ads that literally wrap an entire train. People see these ads from their streets, their cars, and even their own windows facing the elevated line. We’re asking that the MTA be sensitive to the concerns of families by removing them from the subway or, at the very least, moving the ads to other lines.”

The #ImNoAngel campaign is a takedown of last year’s controversial Victoria’s Secret “Perfect Body” campaign, which features svelte lingerie models. The ads feature women in Lane Bryant’s lingerie line Cacique, and their website states “The women who wear Cacique know that sexy comes in many shapes and sizes. They’re no angels—and they own it. Join the women who are redefining sexy by posting your personal statement of confidence using the hashtag #ImNoAngel.”

When you see @theashleygraham on the subway, you know it's gonna be a good day. #ImNoAngel #ftrain pic.twitter.com/L1lOpS6v2Z

The MTA responded with a statement saying that they have no plans to remove the ads. “These advertisements are part of a campaign running in outdoor formats across the country. The ads meet the standards for commercial advertising commonly used by transit agencies in many states,” the statement says. “They are scheduled to run on the F train for another three weeks.”

Despite the body positive message of Lane Bryant’s campaign, some aren’t totally convinced that it’s empowering for larger ladies. Amanda Kate Richards, a plus-size fashion blogger, took issue with the “us vs. them” approach of the #ImNoAngel campaign. “For me, it sends the exact opposite message than the one I’m about,” she wrote. “That is, I don’t think it’s particularly healthy or progressive to pit fat bodies against thin bodies.”

This campaign is just the most recent to take aim at Victoria’s Secret. UK lingerie brand Curvy Kate also produced a body positive version of the company’s “Body for Every Body” ad.