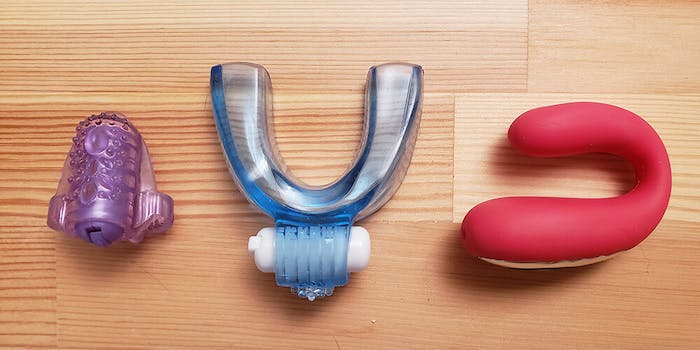 Sex should be fun—and oral vibrators might help with that.

Whether you’re the giver or the receiver, oral sex is one of the most vulnerable sex acts people can do together. It’s scary to be looked at so closely and to be so close. Everyone is worried that they’re not good enough at it. And like all sex, you have to consider factors like hygiene and protection. If you can set your worries aside, the vulnerability can be an amazing opportunity for intimacy. But can vibrators make oral sex better?

These vibrators go somewhere in your mouth to enhance oral sex—at least, that’s what the packaging says. If you’re like me, one big worry comes to mind: Isn’t this a choking hazard? At least there will be someone around to perform the Heimlich.

1) The LingO by Screaming O

Screaming O’s offering is by far the cheapest toy of the bunch. Higher price doesn’t always mean higher pleasure, but here’s a tip: If a sex toy says it is “disposable,” it probably isn’t great.

Here are the pros: The toy can be purchased for under $10, vibrations feel nice in general, and it might make you and your partner(s) laugh.

Here are the cons: Just having it on your tongue feels weird, and it feels even worse when you turn it on. It’s a disposable toy that can’t be easily cleaned, so its existence generates unnecessary waste.

I got this toy on sale, but it normally retails for between $10 and $20 depending on the site, so it’s fair to call it the mid-price candidate. Tongue Star Pleasure Vibe is quite a mouthful, so instead I’ve taken to calling it the mouthguard vibe. This translucent blue toy gets the mouth vibrating job done by fitting over the lower teeth (hence the nickname). While it’s less of a choking hazard, it’s even less sexy than the LingO, and that is an incredibly low bar to crawl under.

Looks aside, consider materials. You can get more time out of the batteries than the LingO, and the mouthguard vibe can actually be washed. It’s a one-function vibrators with a single on/off switch and similar power levels. But a big strike against the “Tongue Star” is that, like far too many sex toys, the materials aren’t disclosed.

The mouthguard’s functionality assured its low ranking. “Strategic design and contoured shape by a leading orthodontist,” the package says. It claims the toy is “ultra comfortable” and “causes virtually no discomfort or vibration to the mouth or teeth while doing so.” I wouldn’t be surprised if this toy’s fit was “ultra-comfortable” for someone on this planet, but neither I nor the folks I tried it with were that person. It certainly was flexible enough to fit any shape, but it was not pretty. It forces the wearer’s tongue to stick out in a way that might be sexy if you’re into humiliation? It also causes there so much drool.

The mouthguard crowded so much of my mouth that I couldn’t go down on my fiance without getting teethy, and any attempt to use my tongue dislodged it. My comes-and-goes jaw pain kicked in, forcing the remainder of testing to be delayed. My fiance complained afterward that their mouth felt buzzy and numb. While my girlfriend was mercifully spared from any negative after-effects, her feedback well summed up the whole of our experiences with this toy: “It was neither good enough to be enjoyable nor bad enough to be fun.”

When people think “fancy sex toy,” they tend to think minimalist, smooth, and techy. In both price and design, the Ora appears to be a top shelf sex toy, and in many ways it meets expectations.

Unlike the LingO and Tongue Star, the Ora is rechargeable with a USB cable, making it a good investment if you think you want to use an oral vibe many times, not just for article research. The packaging discloses the materials it’s made from: silicone and ABS, both of which are body safe. The controls are also more variable (five “decadent modes”) and more accessible. The toy has a large button that turns it on and switches functions with a quick click.

I never quite felt comfortable with it in my mouth, but it was better than either of the previous two toys. For the first time in this experiment “shaped for comfort” actually meant something. As my fiance described it, it was “not necessarily unpleasant” but did stay in place with fairly little effort, especially compared to the cheaper counterparts. One negative I experienced, however, is that all the vibration functions above 2 were so powerful they hurt my head.

As far as receiving oral goes, the Ora was the only toy that made a substantial positive difference. My fiance noted that they all felt nice, because “vibrations feel nice,” but the Ora was the only one where that additional sensation didn’t come at the cost of uncomfortable distraction. For me, the weak, diffused vibration of the cheaper toys just distracted from better, more direct sensations. The Ora was powerful enough to actually add something.

It didn’t revolutionize the experience, but I did plug it in to recharge.

So, are oral sex toys worth it? This is a small sample size, but the answer for most people appears to be probably not.

The Ora felt good enough that I look forward to using it again, but it’s not short on flaws. Around $40 is a lot to spend on a toy when three out of five of the functions make my head bones hurt. Although not as badly as the cheaper toys, the Ora somewhat limits tongue mobility.

I must emphasize once again that each of these toys look supremely ridiculous in use. It is utterly impossible to maintain a sultry atmosphere or expression. But I’d argue that’s not necessarily a bad thing. Sex can be sensual, but it should also be fun. If you’re not afraid to be vulnerable and look a little silly, the number of ways you can fuck will increase exponentially.

Orgasm Oddities is a column dedicated to exploring weird, niche, and inventive sex toys and accessories. We do not shame people who enjoy these toys. We simply seek to answer the question: Does this get a person off? If you have suggestions for sexy items we should review, contact Alex Dalbey on Twitter @thedialogtree or via email at [email protected].