Of course, the man on the receiving end doesn't seem to be getting flak for this at all.

This week, a video of a woman giving oral sex to a man at a club took Dutch social media by storm.

It’s a story that’s pretty much as old as the Internet itself: Girl meets boy. Girl and boy hit it off. Girl gives boy oral sex in a public area, such as a bar or club, an Eminem show, a house party, or a dumpster. Girl and boy are captured on camera by onlookers, and the video documenting that special moment together goes viral. Girl is relentlessly slut-shamed, while boy gets high-fives.

Here is a blurred, somewhat-SFW screengrab: 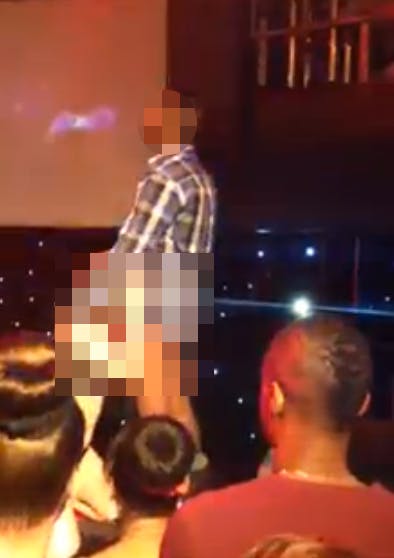 But the fact that oral sex might have been on the agenda for the evening, or that the act took place between what appears to be two consenting adults, hasn’t stopped redditors and Facebook commenters from leaving tongue-clucking, slut-shame-y comments on the video, chastising the woman in the clip for “debasing” herself:

This isn’t the first time the Internet has flipped out over a woman giving a man oral sex in public. Many similar clips have gone viral in the past two years. Earlier in 2014, footage of a young woman fellating 24 men at a bar in Magaluf, Spain, also went viral, which resulted in people harassing the woman and her relatives after her contact information was posted on 4chan. A teenage girl in Grandville, Mich., was also cyberbullied last month after a photo of her giving her boyfriend oral sex at a party went viral on Instagram. In August 2013, a teenage girl in Ireland faced the same abuse after photos of her going down on a man at an Eminem concert went viral.

It didn’t matter that in both cases, the sex acts were consensual (in fact, in the Michigan case, the young woman depicted in the photo boasted about how the scandal increased her number of Twitter followers), or that in the former case the woman in question was of legal age. As those stories proved, and as this specific incident continues to prove, when it comes to women publicly expressing their sexuality, the double standard is alive and well on the Internet.