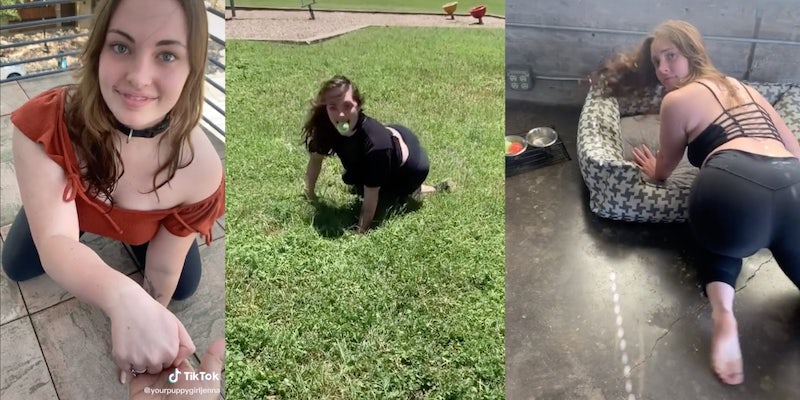 A Texas woman who reportedly said she has “always acted like a puppy” is now garnering more than hundreds of thousands per month through her performance on OnlyFans, after quitting her career as an optician.

Jenna Phillips from Austin, Texas, now pretends to be a dog on OnlyFans, an adult content subscription website, where she runs around fetching balls, rolls around, and takes dog treats, according to her TikTok videos.

The 21-year-old has said that she likes to “roll around, play fetch, get head scratches, run around and play,” according to LADBible, because she always felt like a puppy at heart.

Her monthly income is now 100 times more than her previous income, and she makes six figures, according to the Mirror.

With her content, she has garnered more than 125,000 followers on TikTok, where he bio reads: “just a girl pretending to be a puppy.”

“I have always acted like a puppy, but not in a sexual way at first. I used to pretend I was a puppy when I was growing up,” she said. “I really love praise. I love hearing ‘good girl.’ It makes my heart melt every time.”

When she started her OnlyFans account, the content was “vanilla,” but after almost two years, she began posting as “thatpuppygirl” which is what turned around her business. She said there’s a been “surge” in her following ever since.

She said what made her change her mind about doing vanilla content was that there wasn’t a market for “female puppies” on OnlyFans.

“Whenever I went shopping for the gear, it was only really for men,” she said according to the Mirror. “I thought screw it, why don’t I create the market? I know there’s a demand for it so why don’t I supply it?”