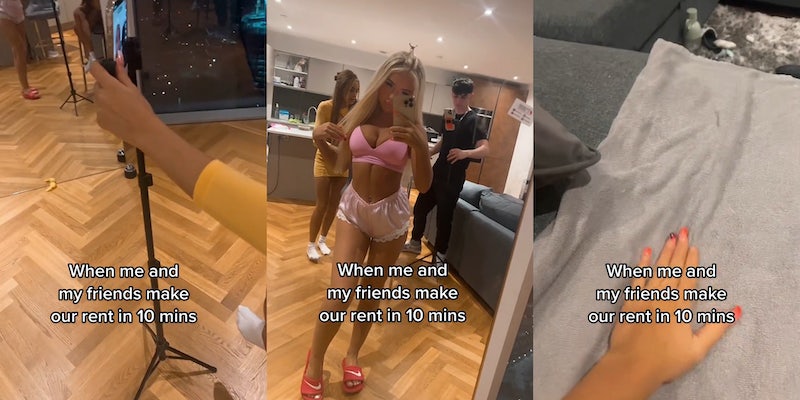 “Everyone saying ‘sad’ I think what’s sad is we have to work long hours just to pay rent”: Adult content creator says she makes rent in 10 minutes, sparking debate

'What’s sad is working yourself to the bone just to retire right before you die.'

An adult content creator claimed she and her friends made enough money to pay rent in just 10 minutes by producing adult content.

In a video with over 10.2 million views, TikTok user and adult performer Belle Olivia (@belleolivia3_) shows herself and her friends appearing to set up for a photo or video shoot.

“When me and my friends make our rent in 10 mins,” the text overlaying the video reads. In the caption, she adds, “Teamwork makes the dream work.”

It appears Belle makes a sizable amount of her income through OnlyFans, a service that allows users to subscribe to content creators to receive exclusive content.

If Belle is truly making her rent from just one or two posts, as the 10 minute timeframe would imply, she is likely among the top earners on the platform. The average OnlyFans creator makes only $180 per month from subscriptions on the platform, though this number excludes earnings made from tips.

Furthermore, while some creators have earned a substantial amount of money through the platform (in 2021, model and TV personality Blac Chyna earned an estimated $20 million per month from the platform), they have also faced considerable difficulties. Some creators have reported facing difficulties opening and operating bank accounts, and while OnlyFans has made efforts to prevent harassment and hacking, creators can still encounter issues on both of these fronts.

As with many discussions of sex work online, users in the comments of Belle’s video were largely divided.

Some users derided Belle for her line of work.

“Your kids will be proud right lol,” added another.

However, the tide soon turned, and over time, more and more users came out in support of Belle.

“What sad is that i give a corporation 40+ hours a week and my 2 week check doesn’t compare to theirs,” wrote a commenter. “props to them!”

“Y’all saying it’s sad, what’s sad is working yourself to the bone just to retire right before you die and realizing you’ve done nothing but survive,” echoed a second.

Some even seemed keen to start becoming an adult performer themselves.

“Ok so where do I start??? Asking for myself,” offered a commenter.

The Daily Dot reached out to Belle via Instagram direct message.