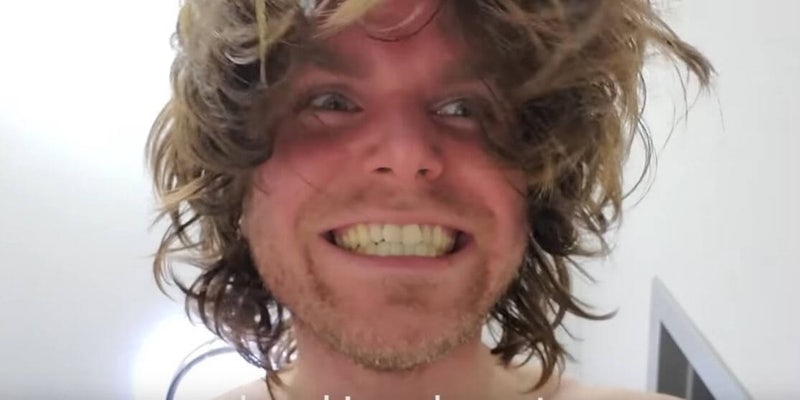 Onision has been banned by Twitch—and people are rejoicing

The online world is closing in around the controversial star.

Onision, perhaps the most controversial social media star of the moment, was banned from Twitch on Wednesday.

The official explanation for why Onision is being punished by Twitch is unclear. The streaming service does not comment on individual Twitch owners, and Onision apparently hasn’t commented on the punishment via social media. It’s also unclear how long the ban will last or if it’s a permanent punishment.

Since Onisoin (aka Gregory Jackson or James Jackson) was banned, the only thing he’s tweeted were the words, “Empower your inner slut. You own the world, you know it & I love you.”

If you look at Onision’s Twitch page—which only had about 3,000 followers—you’ll be met with the message, “Sorry. Unless you’ve got a time machine, that content is unavailable.” That’s the usual verification that Twitch has banned him from the streaming service.

Onision, for what it’s worth, has a much bigger following on YouTube (nearly 1.6 million subscribers), Instagram (358,000 followers), and Twitter (293,000 followers), and even though he was recently banned on Patreon for apparently doxing another YouTuber, he’s still making an impact online.

But others are trying to investigate him for years of alleged abuse of females, including one who said she was underage at the time. Last week, Onision called the police when TV reporter Chris Hansen knocked on his front door, and an old video of him recently resurfaced in which he allegedly threatening his ex Shiloh, saying, “You know this video is never going to be online, right? No one will ever know how much I abuse you.”

During his phone call with 911 when Hansen visited him at his house last week, Onision told the dispatcher, “There’s a person that’s been stalking me online and they just showed up to my house. … They’re like YouTube stalkers. … I didn’t see any weapons. I just saw like six guys in my driveway.”

Still, his Twitch ban caused joy among his detractors.

And there’s at least one question Shiloh would like to know. As Shiloh wrote on Twitter last month, “.@Youtube How long until Onision is held accountable for all the rules he has repeatedly broken on your platform?”