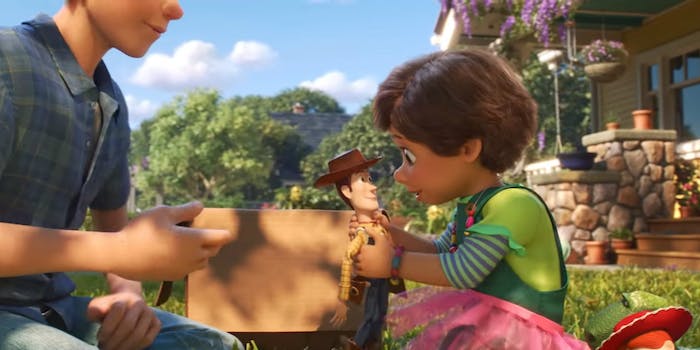 The group says Disney should have warned people.

Two brief moments in Toy Story 4 show a lesbian couple with their child—and the anti-LGBTQ group One Million Moms is outraged.

Toy Story 4 has been well received by audiences across the globe since it hit theaters late last month, topping the box office in multiple countries and holding an impressive 98% on Rotten Tomatoes. Some people going in were concerned about the implications of the new character Forky, a spork overcome with a lack of self-purpose after Woody’s owner, Bonnie, makes him into a toy.

However, some people thought the most disturbing part of the movie wasn’t Forky’s existential implications but a lesbian couple that appears for only a few seconds in two scenes. PinkNews reports that the anti-LGBTQ fundamentalist Christian group One Million Moms called the inclusion of a lesbian couple a “subtle but obvious promotion of the LGBTQ lifestyle.”

The group has a petition to chastise Disney for this inclusion that has only managed to garner 12,500 signatures in over a week.

The group claims that Disney purposefully kept the background detail quiet in order to blindside families and “expose as many children as possible.” The scenes show the couple dropping off their child at school, then later in the movie, picking them up from school and hugging them. In both of these scenes, the family is in the background, and the characters have no lines.

One Million Moms claims that people are being “blindsided” by this inclusion, but there are many people on Twitter who were quite happy to see a same-sex couple with a kid in a Disney movie. Some have noted that Disney likely didn’t find the scene worth mentioning in promotion of the movie because it’s only briefly visible.

prior to seeing toy story 4 id seen some article being like "toy story 4 lesbian scene has conservatives PISSED" and i was like… its a two second shot of some kid in the background having two moms isnt it. and i was Exactly right

Toy Story 4 treats this LGBTQ family as inconsequential as any other group of background characters, and One Million Moms says that the normalization is “exactly why 1MM finds this to be so dangerous.”