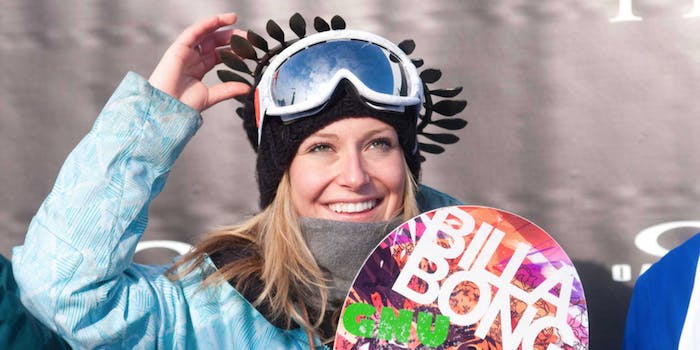 Of course Olympians are hooking up on Tinder

What happens when you combine good-looking hard-bodies, a small space, and Tinder?

So it probably comes as no surprise to you guys that in between competing for the gold, Olympic athletes in Sochi are using their downtime to look for hookups on Tinder.

“Tinder in the Olympic Village is next level,” snowboarder and recent gold medal-winner Jamie Anderson told US Weekly. “It’s all athletes! In the mountain village it’s all athletes. It’s hilarious. There are some cuties on there.”

Lest Olympic gossipmongers get too excited and start speculating on which athlete (or athletes!) Anderson went to the bone zone with, she says she ultimately deleted her account so she could focus on the games. “There was a point where I had to be like OK, this is way too distracting,” she said. Yeah, girl, we hear ya (said with our heads bent over our smartphones, frantically swiping through photos).

“It’s like making the ingredients of a huge stew—a stew of sexual ingredients,” Dr. Judy Kurianski, a sex therapist and clinical psychologist at Columbia University’s Teachers College in New York City recently told ABC. “There is stress, which causes tension, and anxiety and energy, and a massive outpouring of chemicals in the body—adrenaline and endorphins. It’s a powerful concoction of chemicals.”

“Everyone knows the runner’s high,” she said. “Olympian athletes certainly have it—it’s orgasmic.”

With thousands of hard-bodied, flexible youths from all over the world crammed into a relatively small area, it’s not difficult to imagine the kind of freaky-deaky multicultural sex shenanigans that go on behind the scenes. Hey, Benetton—I smell a new ad campaign!