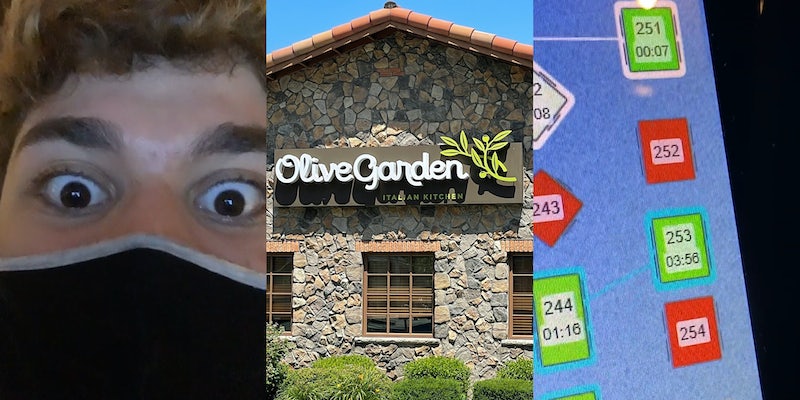 ‘You’re telling me I could eat unlimited pasta for 4hrs?’: Olive Garden server reveals that customers are timed

'I would always be judging the hell out of anyone who stayed more than two hours.'

An Olive Garden server reposted a TikTok from 2020 that shows that tables are “timed,” renewing debate in the comments.

In the video posted by user Dibbs (@dibbs3__) on Nov. 13, he shows the computer screen at the host stand, pointing out the length of time the guests were dining at the bottom of each table.

“Imagine dining in at the Olive Garden for four hours. Could never be me,” he says in the clip.

The caption reads, “Two years ago today i posted this “’controversial’ TikTok cause no one knew yall got timed when you dine in at a restaurant.”

The video has reached over 109,000 views as of Nov. 23, with commenters debating how long it’s appropriate to dine at the restaurant.

“I would always be judging the hell out of anyone who stayed more than two hours lmfao i was like ugh go get a job why do u have so much free time,” one user wrote.

“The restaurant I used to work at had a table there for 5 hours and I was doneeee,” another said.

“I worked at OG for 7 yrs & the longest a table ever stayed was nearly 6 HOURS. their original server came back from break & they were still there,” a third added.

However, others said that they enjoy spending several hours at a restaurant.

“In my culture, this is the norm it’s considered disrespectful to rush thru a meal,” a commenter said.

“When me and my friends get talking idk what to tell you lmaooo,” another wrote.

The Daily Dot reached out to Dibbs via Instagram direct message and to Olive Garden via email.