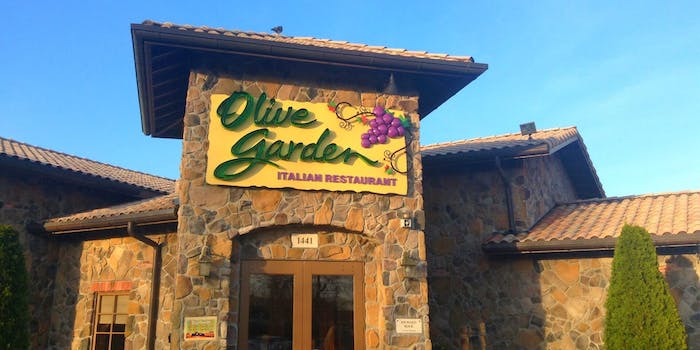 Olive Garden said the manager has been fired.

A white customer at an Olive Garden loudly demanded that she be assisted with a non-Black server, and the manager agreed to the request, according to Facebook posts by a Black hostess.

In a now-deleted Facebook post, Amira Donahue shared what happened during the dinner rush Saturday at the chain restaurant in Evansville, Indiana.

Donahue wrote that the woman was “standing in the way” at the busy restaurant, and Donahue said “excuse me” to get by told the woman to “have a nice day.”

Donahue, who NBC reports is 16-years-old, said the woman commented then commented her family that Donahue “should work at a strip club.”

“People dont understand that we’re children!” Donahue wrote. “That lady said awful things about me ‘is she even from here? Is she like Jamaican or something’ (like I don’t speak English).”

Donahue did not immediately respond to the Daily Dot’s request for comment.

When the woman loudly demanded a non-Black server, the manager complied.

A customer named Maxwell Robbins, who witnessed the incident, also shared a post about the incident on Facebook.

“The manager without hesitation ensures that they will not receive service from a person of color,” Robbins wrote in a post that has since garnered thousands of comments and shares.

An Olive Garden spokesperson told the Daily Dot that the company has terminated the manager.

After the news of the incident spread, the restaurant started receiving bad reviews on Yelp.

“Any restaurant that caves to a customer’s racism and insults a black server by removing her at the request of the racist does not deserve to be in business,” wrote one reviewer on Tuesday. “I am appalled.”