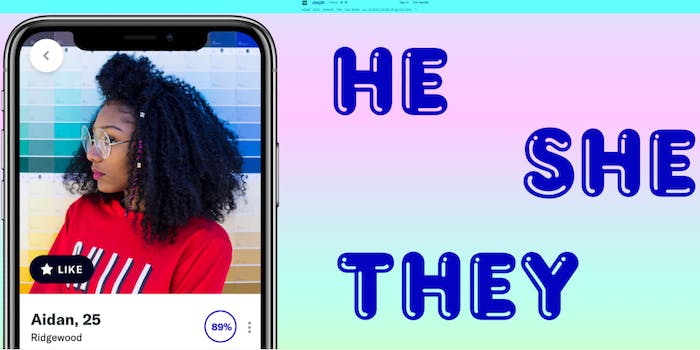 OkCupid is letting its users define their pronouns. The only mainstream dating app other than Grindr to do so, OkCupid has released a new feature that allows users to choose between she/her, he/him, and they/them.

These options, along with the numerous gender and sexual orientation selections already offered, allow for almost any user to feel comfortable on the app. When signing up for the service, a new user can select their gender. If they choose anything other than male or female, the pronoun options will pop up as a menu.

Users who identify as male or female will also have the option to select pronouns. They should see the menu pop up when they begin editing their profiles.

Product designer Rowan Rosenthal created the feature earlier this year at OkCupid’s hack week. Rosenthal, who uses they/them pronouns, told the Verge they have often had awkward first date moments when their date would refer to them as “she.” This made them uncomfortable, but they knew they couldn’t fault their dates. The new pronoun menu allows users to see pronouns without delving into the less-viewed self-summary section.

Users can filter matches based on gender identity, according to Rosenthal, but not yet by pronouns. As of right now, it’s “an extra detail about you.”