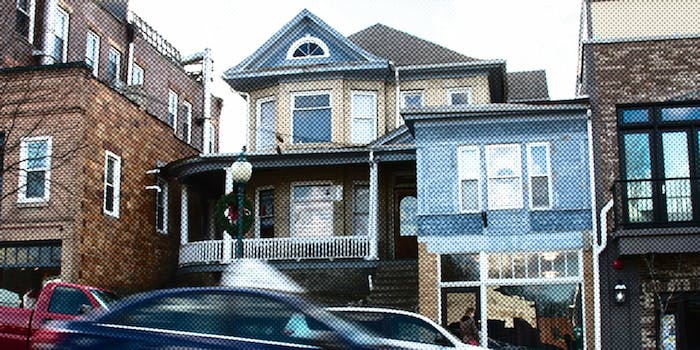 The Ohio University chapter of Acacia fraternity may or may not have a rape problem, but one student organization is warning others that they should beware.

A group called the Ohio University Student Union passed out a pamphlet this Sunday on the Athens, Ohio, campus as students arrived for the start of the fall semester. In their “disorientation guide,” the OUSU—which is not a group formally recognized by the university—called out the school’s Acacia chapter for its alleged bad reputation. 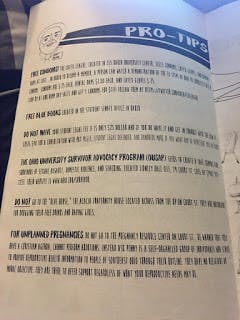 “DO NOT ​GO TO THE ‘BLUE HOUSE’, THE ACACIA FRATERNITY HOUSE LOCATED ACROSS FROM THE BP ON COURT ST​. THEY ARE NOTORIOUS FOR DRUGGING THEIR FREE DRINKS AND RAPING GIRLS,” it reads.

The origins of this allegation can be traced back to YikYak, an anonymous social network popularly used on college campuses for swapping tips, tricks and gossip. In November of 2014, one user posted a serious and bold claim about a problem at the “blue house.” 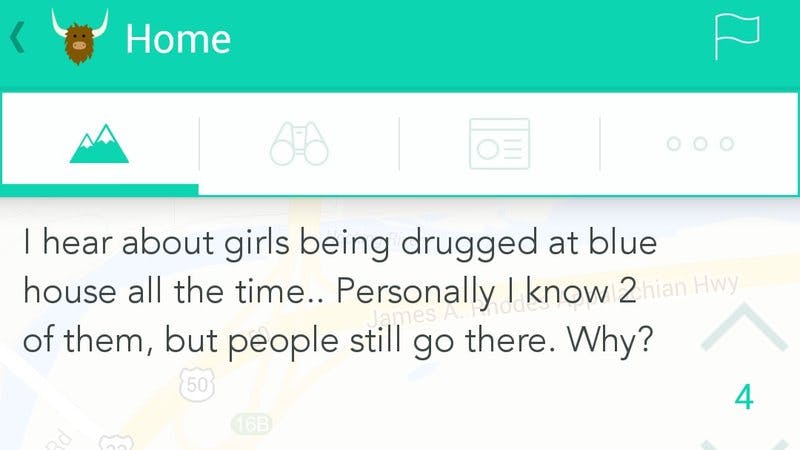 The allegations were then handed over to the Athens Police Department, but they were unable to do much with the anonymous information. A Change.org petition was then created by student organization Fuck Rape Culture, which claimed the YikYak assertion was true and that “The saying “ACACIA will rape ya” has been around for several years.”

A few of the one thousand people who signed the petition said they knew the women who were allegedly drugged and raped at the blue house. But a subsequent investigation by the university in late 2014 found no hard evidence of wrongdoing, which was confirmed by Ohio University spokesperson Bethany Venable:

At the request of Ohio University’s Title IX Coordinator, Ohio University’s Office of Equity and Civil Rights Compliance (then the Office of Institutional Equity) and Community Standards and Student Responsibility initiated an investigation in November 2014 following online allegations against ACACIA. They spoke with several students. The investigation did not lead to the organization being charged with or found in violation of University policy.  Due to privacy laws, we are not able to discuss any individual student cases that may have arisen from an investigation.

Despite being in the clear with the university, ill-will toward the fraternity remains. In a statement to the campus newspaper, The Post, on Sunday, the OUSU was unrepentant.

“We, the Student Union, believe in warning people because Acacia are notorious for this certain behavior,” junior Ryan Powers, a member of the OUSU, said. “We stand by our statements, however, we did not intend to implicate individual members of Acacia fraternity.”

The OUSU, which the university clarified is “not a registered student organization on campus and has no formal affiliation with the University,” has not responded to the Daily Dot’s request for comment.

But for all the people calling for Acacia member’s heads on a beer-soaked platter, other students are disturbed by the unsubstantiated, sweeping claims.

In a blog post on a blogspot page that appears to have been set up just to share thoughts on the scandal, a writer who identifies herself as “Danielle E.” and a member of the Greek community at OU lashes out at the OUSU’s claims.

Let us start with the first thing that is wrong with this “pro-tip”. The “blue house” is not the ACACIA fraternity house. In fact, the “blue house” is not officially associated with ACACIA at all. The actual ACACIA fraternity house, which has their letters on it, is located on E. State St. NOT COURT ST. Secondly, the “blue house” has open parties, which means that everyone and their mothers can get into those parties. So what does that have to do with anything? Well it means that once upon a time, a random person (not associated with ACACIA) could have roofied some poor girl. There are a lot of people at these parties, to assume that all of them are in ACACIA is ridiculous.

Bethany Venable confirmed that the blue house is not an official residence of the fraternity. Jake Zuckerman, a senior at OU, also confirmed it was not Acacia’s official house, but “is traditionally passed down by its members.”

“Whether those rumors are true or false, they have been forwarded by the Student Union with no regard to the culpability or defamation of the accused,” Zuckerman wrote in a “Letter to the Editor” of The Post. “If they believe these rumors they heard, the burden of proof is upon them to provide evidence before they make accusations.”

He closed by saying, “The Ohio Student Union should publicly apologize to the members of the Acacia fraternity, and pray to the god of their choice that the fraternity does not file suit against them for libel.”

The blogger Danielle E. echoed Zuckerman’s sentiment in her post, adding that, “I did not see any facts that backed up” the OUSU’s claims about Acacia drugging and raping girls. “In fact if a woman would have came forward stating that she had been raped there, I trust the OUPD and Ohio University would have taken care of that immediately.”

The American university and police systems have not always upheld their responsibilities in this regard, however. Many stories—most notably that of Emma Sulkowicz at Columbia University—show that reporting instances of rape and sexual assault does not automatically translate into swift justice.

In a statement entitled “Acacia Fraternity Condemns Statements Made by Ohio University Students” from Patrick McGovern, Executive Director of Acacia’s national organization, he confirmed the organization stood behind the OU chapter and would not comment on whether they were pursuing legal action:

Acacia Fraternity Headquarters is aware that there is a situation on the Ohio University campus in which an unrecognized student organization, calling themselves the “OU Student Union” has circulated a pamphlet accusing the men of our chapter of disgusting behavior.

As has been reported in the media, the University has conducted an investigation into the allegations and concluded that there is no evidence that the Ohio Chapter, or its members, has violated any criminal or university code.

Acacia Headquarters is in communication with the undergraduate chapter, local alumni, and the university, to mitigate the harm done by the “OU Student Union” in this instance.

Acacia International Fraternity and the Ohio Chapter condemn sexual assault in the strongest possible terms; and believe that any perpetrators of those heinous crimes should be held accountable to the fullest extent of the law.

Our fraternity has placed the issue of campus sexual assault at the forefront of our educational programming, to promote the safety and well-being of all students in the communities in which we exist.

We have no additional comments pending further investigation.

The office of Sorority and Fraternity Life at OU’s Campus Involvement Center declined to comment on the story, and the OU Acacia chapter could not be reached for comment.

In a story on the Athens News, Jonathan Peters, an Ohio media lawyer and a First Amendment scholar at the University of Kansas, said he believes Acacia could have grounds to sue the OUSU over the pamphlet.

“If those things were provable and I were the attorney suing SU, I’d focus a little less on the information-gathering practices and more on the content of the statement itself: ‘They are notorious for drugging their free drinks and raping girls,’” he said.

We recently reported on the efforts of OU sophomore Rachel Baker, who created a Twitter account to amplify the voices of women who have been and continue to be sexual harassed in any form on campus.

Swing by the involvement fair today and find me if you would like a sticker! pic.twitter.com/E0siBeQ9tG

The circumstances at the blue house remain unclear. But perhaps with more resources and encouragement, survivors of sexual violence will feel comfortable coming forward and sharing their stories.