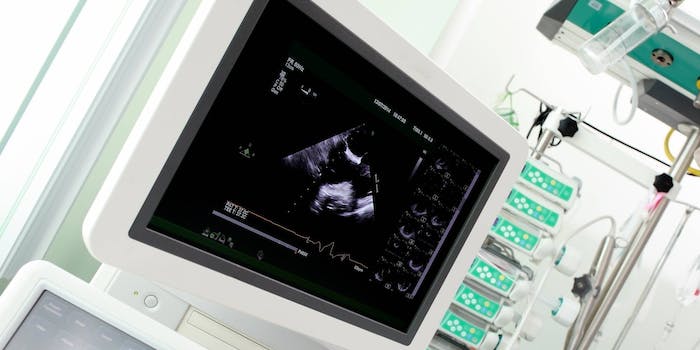 That can happen before a person even knows they're pregnant.

The Ohio House voted 56-39 to implement a “heartbeat bill” to the state’s abortion laws. The amendment, which was attached to a bipartisan-supported bill that updates child abuse reporting laws, would outlaw abortion once a fetal heartbeat is detected, which typically happens at about six weeks, though sometimes as early as three weeks. Meaning the Ohio House just voted to effectively ban abortion for most women, since that’s too early for many women to even know they’re pregnant.

“No person shall knowingly and purposefully perform or induce an abortion on a pregnant woman with the specific intent of causing or abetting the termination of the life of the unborn human individual the pregnant woman is carrying and whose fetal heartbeat has been detected,” according to the bill, and anyone who does will be guilty of fifth-degree felony. The bill makes exceptions if the abortion would prevent the woman’s death or irreversible impairment of a major bodily function.

The bill now goes to Gov. John Kasich, and if he signs it, Ohio would be the third state to pass such a law. However, courts found North Dakota’s and Arkansas’s “heartbeat laws” unconstitutional, as Roe v. Wade protect a woman’s right to abortion until “fetal viability,” which a six-week fetus certainly isn’t.

When asked why the bill was presented after similar measures were deemed unconstitutional, Republican Senate President Keith Faber told the Columbus Dispatch, “A new president, new Supreme Court appointees change the dynamic, and there was consensus in our caucus to move forward.”

In the bill, legislators declare that the fetal heartbeat “has become a key medical predictor that an unborn human individual will reach live birth.” This is not true. Fetuses with detectable heartbeats can still develop birth defects and stop having heartbeats, and just because a fetus has a flicker of a heartbeat does not mean it is viable outside the womb. A fetal heartbeat also develops before any brain activity.

What’s more is that most women won’t make it to the doctor before a fetal heartbeat is present, based on simple math. Many women learn about their pregnancy because of a missed period, which indicates that pregnancy happened any time in the weeks between that and her last period. By the time she makes a doctor’s appointment, four to six weeks could have easily passed since she got pregnant. A bill like this makes it completely impractical for most women to safely obtain an abortion.

Ohio already has strict abortion laws. People seeking abortions must meet with a doctor 24 hours prior, where a doctor can describe the risks of abortion (which has a far lower mortality rate than giving birth). And there’s also a law banning abortion after fetal viability, testing for which must be done at 20 weeks.