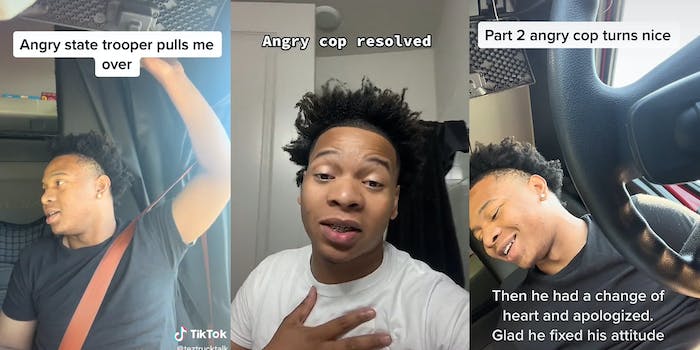 ‘He 100% realized he was being filmed’: Police officer accuses truck driver of swerving out of lane, then takes it back and apologizes

'Police officers are confrontational and arrogant then have the nerve to demand respect.'

A truck driver shows a clip of a state trooper accusing him of swerving out of the lane, later apologizing for his attitude in a now-viral series of TikToks.

In the video posted by TikToker Tez (@teztrucktalk) on Sunday, he films himself in the driver’s seat of his truck as the police officer tells him that he received “multiple calls that [he] was going over the line.” The officer then asks Tez if he is “falling asleep.”

“I’ve been behind you for five miles and you’ve gone over the fog line three times,” the officer says in the clip.

After Tez asks the officer what a “fog line” is, the officer says that he captured it on his dash cam and asks him how he doesn’t know what a fog line is if he is a truck driver. When Tez asks him to clarify that the fog line is the “white line” and tells the officer that he also has a camera on his truck, the officer angrily asks him for his “logbook,” “license,” and other information.

“Are you upset?” Tez calmly asks the officer.

The officer then tells him to step out of the vehicle saying, “you aren’t going to argue with a state trooper on the side of the road.”

The video has reached over 7.2 million views as of Tuesday and is captioned, “Angry state trooper pulls me over.”

In a follow-up video showing the end of their interaction, Tez says that the “angry cop [turned] nice” and apologized to him.

“He took me out the truck to make me wait on the side of the road just to let me go back to the truck in 5 min,” the text overlay on the clip reads.

In the clip, the officer tells Tez that he is “not going to issue a citation” and lets him off with a warning, apologizing for how he spoke to Tez when he gives him back his license.

“A lot of times when we come up to trucks, we never know what we’re in for, so I apologize for coming in the way that I did,” the officer says. “I didn’t mean any disrespect. That’s my bad. I messed up, I’ll admit it.”

In the comments, users commend Tez for being polite during the whole interaction but suspect that the officer changed his attitude when he realized he was being filmed.

“He apologized cause you was recording him,” one user wrote.

“That camera does things to people for sure. Lol,” another said.

Other commenters said they “respect” the officer for apologizing for his attitude.

“I respect him for apologizing, I real man admits when he’s wrong,” one commenter said.

“At least he apologized … still had no right to come up with attitude the way he originally did tho,” another wrote.

In a third video, Tez says he just “figured the cop was having a bad day,” and encourages viewers to de-escalate high-stress situations.

“Any situation that you’re in, try to de-escalate it, because this shit really not worth it,” Tez says. “Nobody is worth you, your energy, or your time.”

The Daily Dot reached out to Tez via TikTok comment.