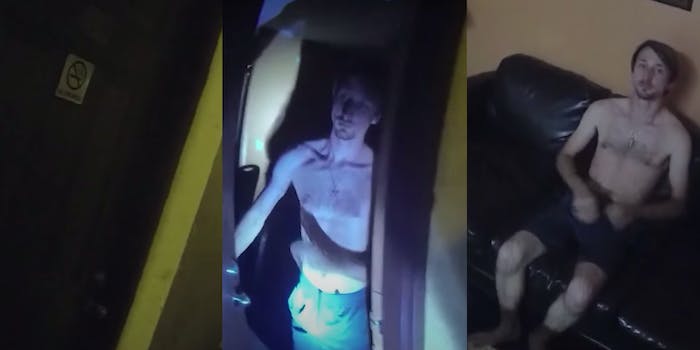 Thankfully, the girl was uninjured.

A video shows a Florida sheriff’s deputy rescuing a 13-year-old girl from a motel room, where she was trapped with a 22-year-old man she met online.

The details of how the girl met 22-year-old Tyler Thompson are hazy. A friend of the girl’s told Deputy Royce James he may have picked her up at a Dollar General near her school, then taken her to a motel room for the evening, Fox 8 reports. The girl’s grandmother reported her missing last Thursday after she missed a basketball game after school and didn’t come home.

After James spotted the girl on Dollar General’s surveillance footage, he visited several nearby motels to search for her, finding the right one on his third try. The motel helped James identify Thompson and escorted him to the correct room.

The video shows Thompson answering the door when James and the manager knock, then sitting on a couch for the duration of the interaction. The teenage girl immediately runs to the deputy and gives him a hug before confirming she was uninjured.

After asking the girl to wait in the bedroom, James asks Thompson for his age. Thompson refuses to give an answer. After repeating the question and being ignored a second time, James’ patience slips.

“If I ask you that question again, I’m going to lose my fucking mind,” James says. This finally gets a reaction out of Thompson, who informs the officer of his age.

James confirms to dispatch that Thompson is “too old.” The video ends shortly after that.

Following Thompson’s arrest, the girl was taken to a nearby hospital, where she was medically cleared. She then visited the Florida Department of Children and Families for an evaluation before returning to her family.

Thompson was arrested on charges of “interference with child custody and traveling to meet after using a computer to lure a child,” but was released after posting his $15,000 bond, Fox 8 reports. Additional charges are still pending.