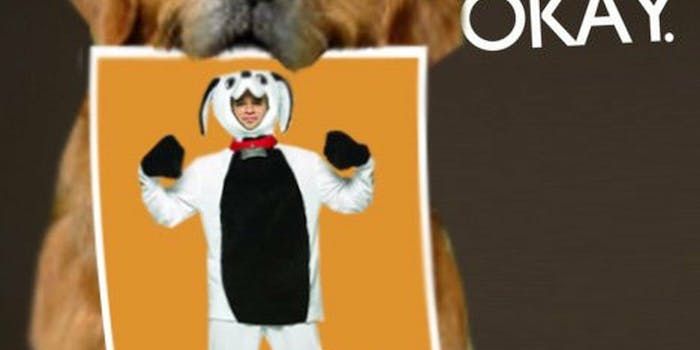 Think tasteless Halloween costumes are a nuisance? Students at Ohio University decided to do something about offensive costumes. The results aren't quite what they expected.

Unless you’re planning to dress up as zombie Muammar Gaddafi this year, you probably think tasteless Halloween costumes are a nuisance. But for students at Ohio University, offensive costumes are a big deal.

The president of Students Teaching Against Racism (STARS) launched a campaign on her Tumblr called “We’re a culture, not a costume.” It’s comprised of posters depicting serious-faced young people holding up pictures of costumes meant to parodize their race. For example, one poster shows a Japanese woman solemnly reacting to a picture of a goofy geisha getup.

STARS has fewer than ten student members. Even so, their modest movement has accrued more than 20,000 Tumblr reblogs and reached more than 70,000 viewers.

But on the Internet nothing is sacred. Not everybody saw the movement as intended. Instead, “We’re a culture, not a costume” springboarded a memetic image macro.

Using the campaign’s slogan, jokesters replace the students with pop-culture icons and cartoon characters. Everyone from Snooki to Dr. Who’s arch-nemeses, the Daleks, is getting a chance to contest costumes they deem offensive.

STARS’ student president, Sarah, is already one step ahead. She posted yesterday to her Tumblr that the group is seeking legal advice.

“We have a meeting with a lawyer on Monday so we can protect our posters and the posters will be all over Ohio University’s campus this week,” she wrote.

Personally, we’re a little torn about the joke. While we don’t endorse offensive costumes, we can’t help but laugh at a dog disapprovingly commenting on a picture of a man in a dog suit.

Commenting on the Know Your Meme page, Rob Hensley weighs in on the ethical dilemma:

“Maybe this is something we shouldn’t be parodying, but I thought the Dalek was hilarious.”