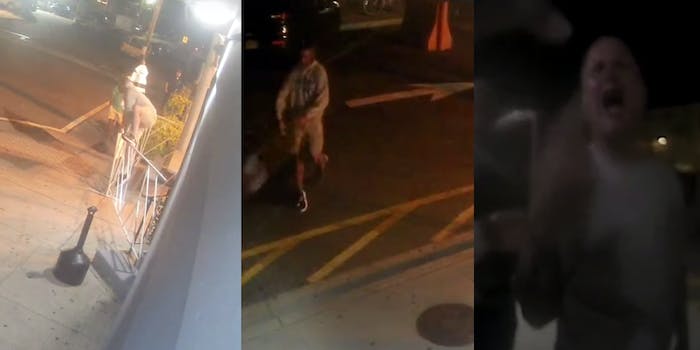 The cop and the woman were apparently in a relationship.

Recently released footage shows an off-duty police officer vaulting a fence and shoving a woman to the ground outside a New Jersey bar.

The incident took place outside a North Wildwood bar on Sept. 26 and resulted in the arrest of the off-duty officer, Deptford Police Lt. David Grogan. Grogan was charged with simple assault and resisting arrest, Politico reports. The story was initially reported by local publication NJ Advance Media.

The nearly seven-minute YouTube video, which compiles footage from surveillance cameras and police body cameras, begins with an exterior shot of the bar. Several women can be seen walking away from the bar entrance before a man in a white hoodie—presumably Grogan—hoists himself over a divider and runs after them. He approaches one of the women and shoves her to the ground.

The video then shifts to body camera footage, as the officers watch Grogan vault the fence. His physical altercation with the woman is obscured, but she can be seen rising from the pavement as police intervene. She rushes to Grogan’s defense, telling officers that “he’s a cop.”

Several other men who appear to be Grogan’s friends soon join the cluster. They crowd around the police and begin insulting and taunting the arresting officers.

The officers attempt to have a conversation with the belligerent men, several of whom claim to also be police, for several minutes. A North Wildwood cop accuses the other men of “creating a scene,” which one of them vehemently denies.

Witness statements and the newly released footage reveal that the woman who was assaulted is Grogan’s girlfriend. One of the men who claimed to be an off-duty cop told her not to comply with the police. The woman is seen walking away, at which point the off-duty cop tells a Wildwood officer to “get a real job.”

The footage ends with officers removing Grogan from the premises and driving him to the nearby precinct, where he received his charges. None of the other people involved appear to have been arrested.