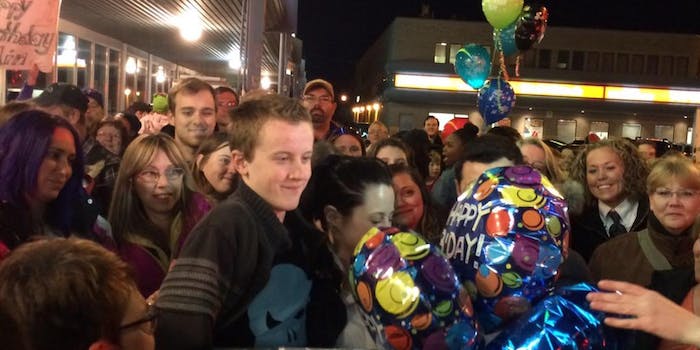 Odin Camus had no RSVPs to his birthday party. His mom decided to change that.

A Canadian teenager named Odin Camus has received well-wishes from celebrities, sports teams, and people around the world, thanks to the magic of the Internet.

Camus, who has been diagnosed with Asperger’s syndrome, was about to have an unremarkable 13th birthday after a disappointing zero people RSVP’ed to his invitation. So his mom turned to a Facebook group of mothers in Peterborough, Ontario, asking them to text her son happy birthday wishes.

Her request went viral, spreading to Twitter and around the world via the #odinbirthday hashtag. It got the attention of celebrities and strangers alike:

Happy 13th Birthday to our pal, Odin from all of Leafs Nation! #OdinBirthday

Happy 13th Birthday to Odin from the @BlueJays! #odinbirthday http://t.co/BDIcRxVhVN

What a night! Awesome turnout for an amazing guy. #odinbirthday pic.twitter.com/EbwgeFHMJa

Odin’s phone has been blowing up with calls and text messages ever since then. By noon on his birthday, he had received over 1,000 text messages. (One of his birthday gifts was a new cellphone, which has surely been put through its paces since then.)

Odin also had another IRL party at an area bowling alley, which he showed up to in a limo. Nearly 200 people had to wait in the parking lot to get in the party.

When she first reached out to other mothers on Facebook, Odin’s mom wrote, “I want his thirteenth birthday to feel special, and like people care about him.” Mission accomplished.