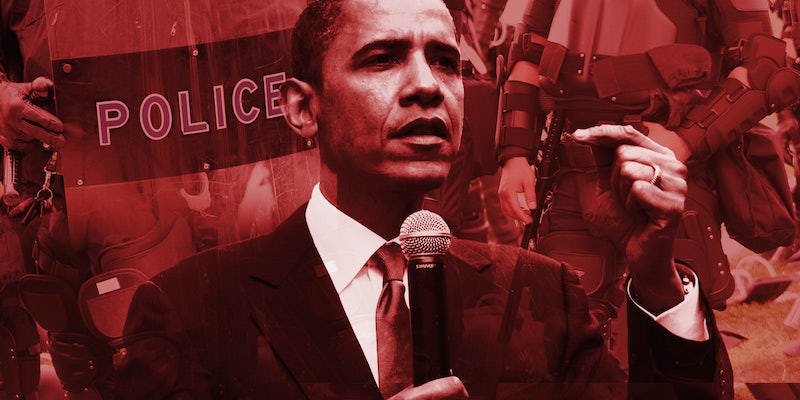 The militarization of American law enforcement will continue.

President Obama announced on Monday a new plan that will provide additional training to local law enforcement agencies armed through federal programs with billions of dollars of military-grade equipment.

Obama’s plan will not stem the flow of the military tactical gear to local police, which officials say is intended for counterterrorism operations but has frequently been deployed in U.S. cities at protests and riots. Instead, the administration has proposed more training for cops that receive the equipment, a central database to track them, and increased assistance to local police departments from the federal government.

Among the proposed measures, Obama promised an executive order to be signed the end of February 2015, authorizing federal agencies to transform the way in which state and local police deploy and maintain the high-powered weapons and armored vehicles obtained from the Pentagon.

A “21st Century Policing” task force is to be created as well, which “will examine, among other issues, how to promote effective crime reduction while building public trust,” the White House said.

“Recent events in Ferguson, Mo., and around the country have grabbed the attention of the nation and the world, and have highlighted the importance of strong, collaborative relationships between local police and the communities that they protect,” David Hudson, an associate director in the Office of Digital Strategy, wrote on Monday.

Among the steps outlined by Hudson were the advancement of uniform cameras worn by police officers, reforms to how the federal government equips state and local law enforcement with military-style equipment, and a new task force to expand the “community-oriented policing model.”

Additionally, the president’s plan calls on Congress to approve a three-year, $263m spending package to implement changes nationwide; around 29 percent of the funds would be used to equip an additional 50,000 police officers with uniform cameras. Civil rights leaders along with the family of Michael Brown, whose shooting death by Ferguson, Mo., police officer Darren Wilson sparked nationwide protests, have called on lawmakers to pursue a federal law making such cameras mandatory for all police officers.

The president’s new “Body Worn Camera Partnership Program” would provide a 50 percent match to local agencies who purchase body cameras, the White House said. It’s estimated, for example, that equipping every Ferguson Police Department officers with cameras would cost, at minimum, $19,000. For comparison’s sake, one of the armored vehicles seen there during a protest, the Lenco BearCat, costs approximately $180,000.

The president’s decision to ignore warnings from critics opposing what many call the “militarization” of America’s police isn’t likely to garner support among a growing national movement of politically charged youth protesting the state of law enforcement in America.

On Monday, a group activists interrupted a speech by U.S. Attorney General Eric Holder given at an Atlanta Baptist church. The demonstration, he said to the crowd’s applause, was a “genuine expression of concern and involvement.” The protesters were, nevertheless, escorted outside 30 seconds later while chanting: “We have nothing to lose but our chains.”