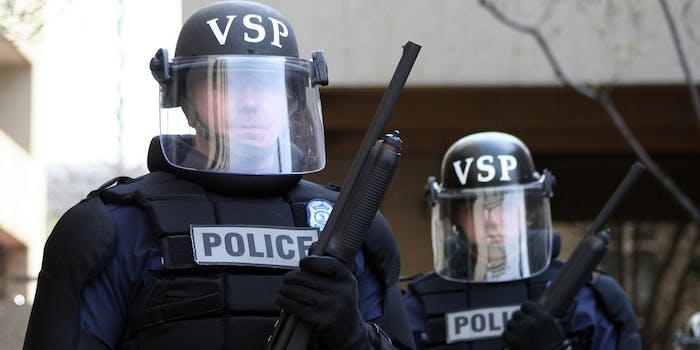 It's an important first step in curbing police abuse.

President Obama will ban the federal government from selling certain military-style weapons and equipment to local police departments, in the federal government’s first major response to a wave of clashes between officers and protesters that have brought national attention to the issue of police militarization.

“Effective immediately,” the Associated Press reports, “the federal government will no longer fund or provide armored vehicles that run on a tracked system instead of wheels, weaponized aircraft or vehicles, firearms or ammunition of .50-caliber or higher, grenade launchers, bayonets or camouflage uniforms.”

Obama is also considering ways to recall items in these categories that have already been provided to local departments.

Police departments will also face stricter scrutiny when trying to buy other items, from drones to battering rams and riot batons to Humvees. They must submit a “persuasive explanation of why it is needed,” demonstrate that they are properly trained and capable of tracking the equipment’s use, and receive approval from the city government.

The president will announce the new restrictions in a Monday visit to the headquarters of the Camden Police Department.

As police departments have responded to waves of protests in cities like Ferguson, Mo., and Baltimore, Md., cable news has been flooded with images of protesters running half-blind from tear gas, being beaten by officers in riot gear, and being corralled by vehicles that look like they belong in Iraq or Afghanistan.