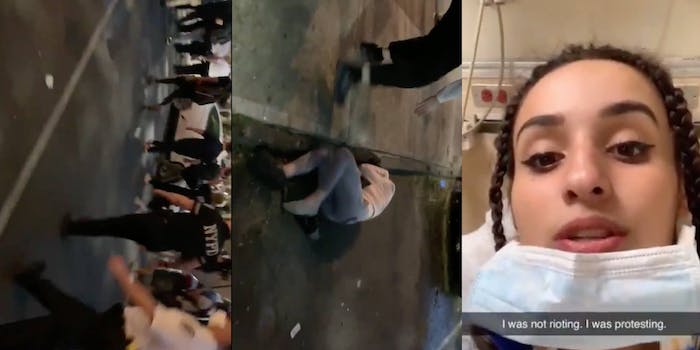 Vincent D’Andraia shoved a woman to the ground and called her a 'stupid f*cking b*tch.'

A New York City police officer who shoved a protester to the ground is facing multiple charges including assault, the Brooklyn District Attorney’s Office said.

During a May 29 protest in Brooklyn, Newsweek reporter Jason Lemon twe\eted a video of D’Andraia, 28, shoving a 20-year-old woman to the ground and calling her a “stupid fucking bitch.”

The woman lies on the ground for several seconds, clutching her head. Other protesters help her and attempt to get D’Andraia’s badge number.

Later that night, Dounya Zayer identified herself as the woman in the video. From her hospital bed, she said that she was “in no way” aggressive toward the officer.

“This was me, and I want to make one thing clear to all the people that are commenting lies below this video,” she wrote. “I did NOT spit in this officer’s face. I was wearing a face mask. He told me to get out of the street and then immediately threw me out of the way.”

After the video went viral, the New York Police Department launched an investigation into D’Andraia’s conduct. He was suspended without pay last week.

Zayer also posted a video she recorded immediately before D’Andraia pushed her that shows his face and the face of another officer accompanying him, who was later identified as Deputy Inspector Craig Edelman. Edelman was removed from command and transferred to another department earlier this week.

Zayer’s lawyer, Tahanie Aboushi, said as a result of the attack Zayer suffered, “serious, significant, and permanent injuries,” BuzzFeed reports. Those injuries include seizures, a concussion, bruising, and lacerations.

In a statement announcing the charges against D’Andraia on Tuesday, Brooklyn District Attorney Eric Gonzalez said he was “deeply troubled by this unnecessary assault.”

Aboushi commended Gonzalez for “acting swiftly to hold  [D’Andraia] accountable” but added that “justice remains to be seen.”

“We have the right to assemble and speak freely. Officer D’Andraia assaulted Dounya who was peacefully protesting the very thing that happened to her—police brutality,” Aboushi said.