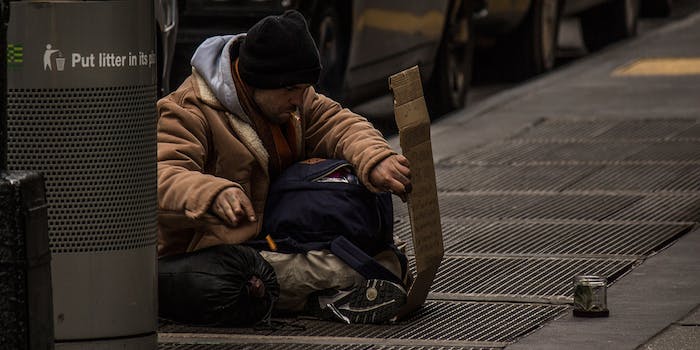 Surely that's the best way to get the mayor's attention, right?

A Flickr account that’s reportedly the official online picture repository for the Sergeants Benevolent Association, a police union for New York City sergeants, has devoted its space purely to new photos of the city’s homeless.

The album is titled “Peek-A-Boo.”

The SBA’s photos aren’t particularly well composed. Some are blurry, turned 90 degrees, or distorted from being taken through a window. A few aren’t even clearly of the homeless.

In an open letter obtained by the New York Post, SBA President Ed Mullins made the union’s intentions clear. The presence of homeless people was a direct result of the De Blasio administration’s “failed policies, [which has led to] more homeless encampments on city streets, a 10 percent increase in homicides, and the diminishing of our hard-earned and well-deserved public perception of the safest large city in America,” Mullins said.

The SBA didn’t respond to the Daily Dot’s request for comment.

NYPD officers aren’t actually allowed to take photos of the public while on duty, Mullins said, so the page’s photos came from officers either off-duty or on their way to or from work.

Photo via Derek Mindler/Flickr (CC BY 2.0)