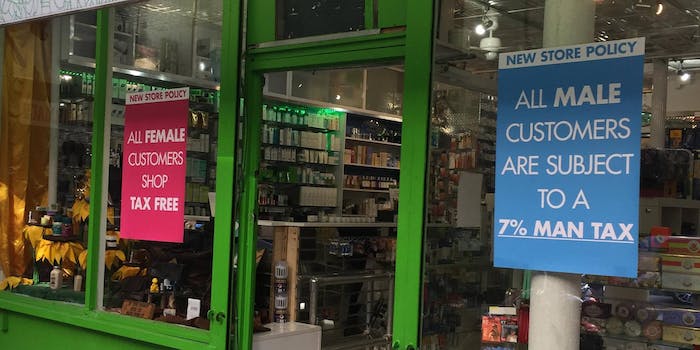 Women, on the other hand, shop tax-free.

Over the past few years, there’s been an increasing movement to do away with the “tampon tax,” and other taxes that activists say put an undue burden on women. For instance, in many states, menstrual products are taxed as luxury items, and a woman’s blouse costs more to dry clean than a man’s button-down shirt, even if they’remade of the exact same material. Paired with the wage gap, any extraneous costs lead to an even greater disparity in income between men and women.

Now, one Manhattan pharmacy is trying to solve that gap with a 7 percent man tax.

Thompson Chemists owner Jolie Alony told the Daily Dot she put up the sign today, and it’s already gotten a lot of reaction. “We thought it’d be a great idea with all the political things going on—with Clinton being such a woman and the other guy and his womanizing,” she said. Citing the “pink tax,” she said, “We wanted to share that women deserve to get a break, and men deserve to be charged 7 percent more. Women are spending more in general and we make less, so we deserve to have a break.”

Alony said a few couples have come in and gotten a kick out of the sign, including one woman who said 80 percent of the stuff in the bathroom belongs to her boyfriend anyway. “Other couples were a little upset about it, saying, ‘Fuck you,’ ‘You’re being a sexist,’ and to get a lawyer,” said Alony. “We live in a big world, and I think we need to raise awareness.”

Alony says it’s up in the air how long the promotion will last, especially since “the disclosure of differing prices or fees based upon gender by a retail service establishment” is a violation of New York City pricing laws. For now, though, Thompson Chemists they’re paying the difference in prices out of their pockets.

So if you’re a woman in New York City, maybe it’s time to stock up on some essentials.